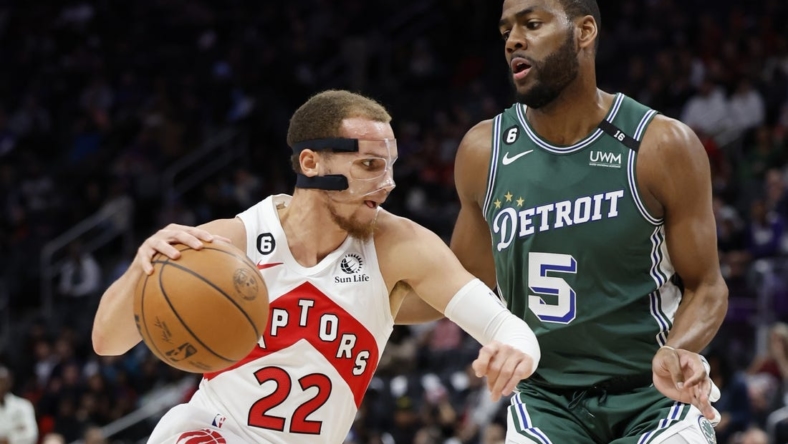 Dalano Banton scored a career-high 27 points and the depleted Toronto Raptors held off the host Detroit Pistons 115-111 on Monday.

Chris Boucher had 20 points and O.G. Anunoby supplied 19 points and seven rebounds for the Raptors, who had lost six straight to the Pistons. Malachi Flynn added 12 points.

Toronto point guard Fred VanVleet missed his second straight game due to a non-COVID illness. Backcourt partner Gary Trent Jr. and forwards Pascal Siakam and Precious Achiuwa were sidelined due to a variety of injuries.

Detroit’s second-leading scorer, Cade Cunningham, sat out his third consecutive game due to left shin soreness. Isaiah Stewart missed the second half due to a right foot sprain.

The Pistons committed 13 turnovers in the first half as Toronto took a 58-51 lead. Neither side led by more than nine points.

That quickly changed as Toronto opened the second half with a 7-0 spurt.

A steal and dunk by Killian Hayes midway through the quarter cut Toronto’s lead to 72-63.

Flynn drained a 3-pointer with two minutes remaining in the third to extend the Raptors’ advantage to 14, 86-72. Toronto brought an 88-77 lead into the fourth.

Ivey had eight points in the first 3:30 of the quarter, then fed fellow rookie Jalen Duren for a dunk. Hamidou Diallo made two free throws to cut the Raptors’ lead to 94-93.

Boucher made an alley-oop dunk off a Banton feed to keep Detroit at bay.

From there, the Raptors continued to cling to a slim lead. Scottie Barnes’ basket with 2:30 left made it 107-103. Thaddeus Young’s tip-in made it a six-point game.

Bogdanovic hit a 3-pointer in the final minute to slice the Raptors’ lead to 111-108. Ivey had a layup try blocked on Detroit’s next possession. Banton then knocked down two free throws.

Ivey then made a 3-pointer, but Banton tossed in two more free throws to seal Toronto’s victory.