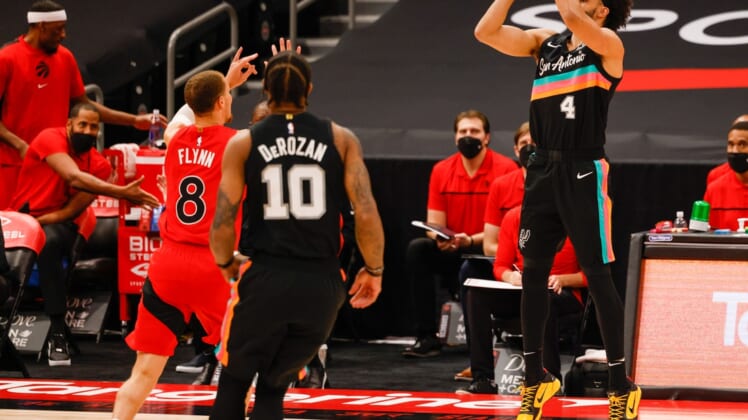 Toronto, playing without Fred VanVleet (suspension), Kyle Lowry (rest) and Gary Trent Jr. (right ankle soreness), and on the second night of a home back-to-back, were mostly in control of after the first six minutes.

The Raptors led by one point at the half, by as many as nine in the third quarter and by three heading to the fourth. San Antonio got no closer the rest of the way.

Friday’s game was the second of a five-game homestand for Toronto after losing to Atlanta on Thursday, and it ended the Raptors’ losing streak at two games overall.

San Antonio wrapped up a five-game road trip that saw it go 2-3. The Spurs also had a two-game winning streak snapped.

All five of the Raptors’ starters scored in double figures. Malachi Flynn hit for 16 points, Khem Birch tallied 14, and Chris Boucher scored 12 points and grabbed 12 rebounds, while Yuta Watanabe contributed 11 points off the bench for Toronto.

Derrick White led the Spurs with 25 points, with Patty Mills scoring 23, DeMar DeRozan finishing with 19 points and 11 assists, and Dejounte Murray and Keldon Johnson hitting for 11 and 10 points, respectively.

San Antonio was up 32-30 at the end of the first period, but the Raptors went in front in the first minute of the second quarter on a jumper by Rodney Hood and owned a 58-57 advantage at halftime.

Mills’ 17 first-half points paced all scorers, with Johnson adding 10 for the Spurs. Anunoby led the Raptors with 11 points, while Siakam and Boucher had 10 points apiece.

The Raptors pushed their advantage to as many as nine points, at 75-66 on a 3-pointer by Anunoby, at the 5:36 mark of the third quarter. San Antonio answered by scoring 13 of the ensuing 16 points to go up at 79-78, but Toronto led 85-82 heading into the fourth quarter.