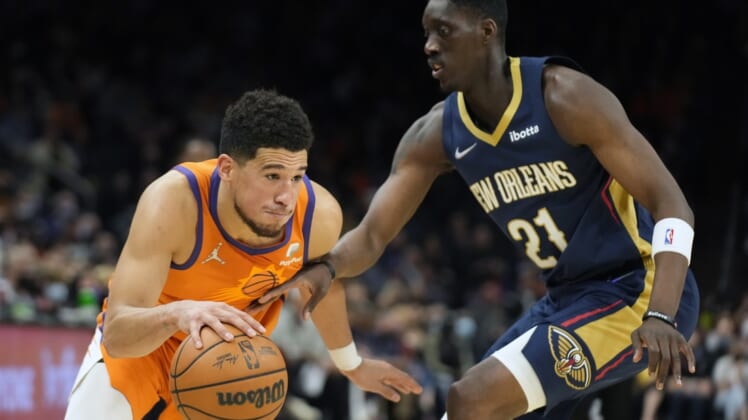 In their first game after the All-Star break, the New Orleans Pelicans beat the Suns 117-102 on Feb. 25 in Phoenix.

That started a four-game winning streak that carried New Orleans into 10th place in the Western Conference while the NBA-leading Suns — who had won their previous eight games — were adjusting to the absence of injured All-Star Chris Paul.

Things have changed significantly for both teams as they prepare to meet again Tuesday night in New Orleans.

The Pelicans’ four-game winning streak was followed by a four-game losing streak, which ended with a 130-105 home victory against Houston on Sunday. The Pelicans’ top two scorers — Brandon Ingram and CJ McCollum, who combined for 60 points in the win in Phoenix — are sidelined.

The Suns, meanwhile, have adjusted to Paul’s absence and are getting close to clinching the league’s best record as they await Paul’s expected return from a fractured thumb for the start of the postseason.

Phoenix lost its next game after falling to New Orleans but has gone 5-2 since and had a season-high point total in routing the visiting Los Angeles Lakers 140-111 on Sunday night.

Devin Booker had 30 points and 10 assists and Deandre Ayton had 23 points and 16 rebounds.

Coach Monty Williams said Ayton texted him after a loss to Toronto on Friday night, saying he could take advantage of the Lakers’ relatively small lineup.

“It wasn’t selfish, not like I want more points,” Williams said. “(It was) ‘I can dominate them. I think we need to look at me more.’ He was like, ‘I can work down there.’ I’ve been around long enough to know his intentions, and he backed it up.”

Ayton won’t face any small lineups against the Pelicans, who have been rotating Jonas Valanciunas, Jaxson Hayes and Willy Hernangomez — all of whom match Ayton’s 6-foot-11 height — inside.

Ingram has missed the Pelicans’ last four games due to a hamstring strain and is expected to be re-evaluated this week. McCollum entered the NBA health and safety protocol last Thursday and has missed the last two games.

New Orleans had allowed an average of 130 points during its four-game losing streak but took command against the Rockets by outscoring them by a combined 69-40 in the second and third quarters.

“They came out right away and hit a few shots,” Pelicans coach Willie Green said. “We’re continuing to have to make adjustments to the team with lineups, guys being out, so sometimes the defense takes a step back, sometimes the offense. It’s good to see our defense come around later in the game.”

“(I’m) just very pleased with our overall effort, and we sustained that effort for 48 minutes, pretty much,” Green said. “Everybody who played came in and played with purpose. Just beautiful basketball to watch when we do it together like that.”