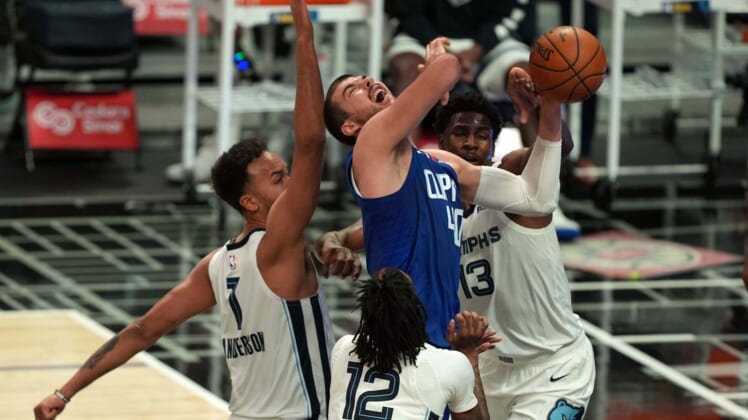 Playing short-handed and trailing by as many as 18 points, the Los Angeles Clippers fought back to earn a 117-105 comeback win over the visiting Memphis Grizzlies on Wednesday night.

The Clippers (42-19) finished with four of their five starters in double figures. Los Angeles posted its third consecutive win and earned its 10th victory in 11 tames. Los Angeles outscored Memphis 34-20 in the third quarter to take the lead for good.

Jackson was making his first appearance in a game since last August. Jackson had not played since sustaining a season-ending torn meniscus in his left knee that required surgery in the NBA’s Orlando-area bubble last year.

Jackson was on a minutes restriction and came off the bench. He added eight rebounds and four blocked shots in 18 minutes.

The Grizzlies also got back Dillon Brooks. The guard missed the team’s Monday loss to the Denver Nuggets with thigh soreness. Memphis center Jonas Valanciunas did not play Wednesday because he remains in the concussion protocol.

The Clippers had a handful of players sitting out the second of a back-to-back games after defeating the Portland Trail Blazers on the road Tuesday.

Averaging a league-leading 56.4 points a game in the paint, Memphis finished with 42-26 advantage over the Clippers in that stat. Both teams shot exactly 45.2 percent from the floor, but Los Angeles made 27 of 36 free throws while the Grizzlies were only 16 of 23 at the line.