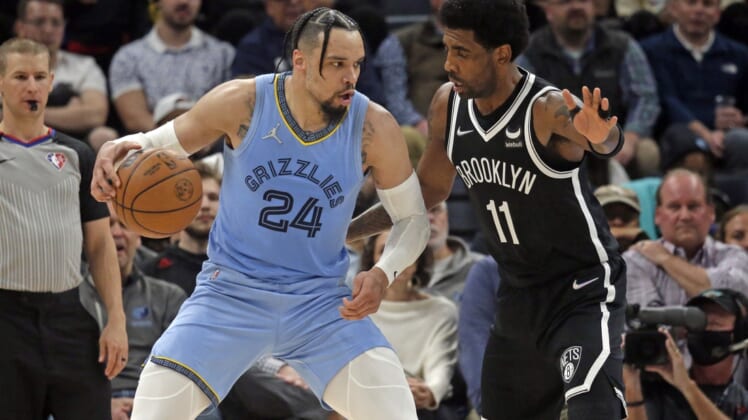 Desmond Bane and De’Anthony Melton scored 23 points apiece for the host Memphis Grizzlies, who blew an 18-point lead before executing down the stretch in a 132-120 victory over the Brooklyn Nets on Wednesday.

The Nets fell despite getting 43 points from Kyrie Irving and 35 from Kevin Durant, and despite Memphis playing without Ja Morant, who sat out a second straight game due to a sore right knee.

The Grizzlies (50-23) reached 50 wins for the fifth time in franchise history and improved to 15-2 in games Morant has missed this season.

Dillon Brooks added 21 and Tyus Jones, filling in for Morant, contributed 16 points and 10 assists as the Grizzlies beat the Nets (38-35) for the sixth straight time.

Memphis’ Brandon Clarke added 10 of his 14 points in the fourth quarter. Jaren Jackson Jr. chipped in 13 and Kyle Anderson finished with 10.

The Nets were held to 16 points in the fourth quarter, when Durant scored just two points. Brooklyn missed 10 of 17 shots and committed six turnovers in the final period.

Andre Drummond added 15 and Bruce Brown chipped in 13 for the Nets, who shot 49.4 percent but also allowed 27 points off 14 turnovers.

Melton, Brooks and Bane combined for 32 points as the Grizzlies built a 40-32 lead through the opening quarter. Brooks made it 63-45 with 5:57 left in the half, and the Grizzlies held a 76-62 lead at halftime after Anderson stole the ball from Durant and dunked with 4.6 seconds left.

Irving’s four-point play brought Brooklyn within 90-87 at the 5:57 mark of the third quarter. The Nets took their first lead since the first quarter when Durant hit a pair at the line with 2:34 left in the third to make it 98-97.

Brooklyn took a 104-103 lead into the fourth after Durant connected with Brown for a layup with 2.4 seconds left.