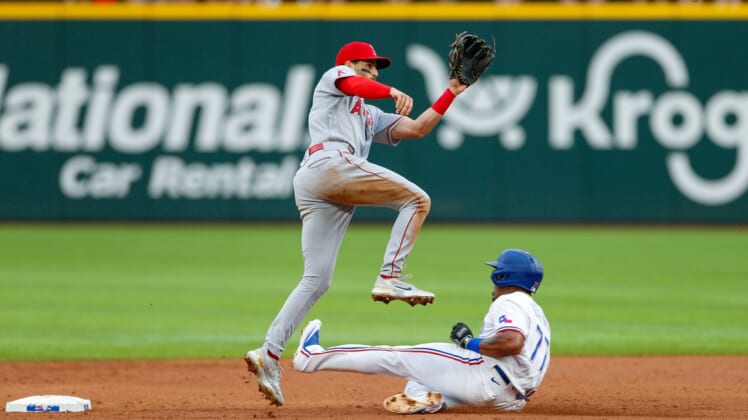 Shohei Ohtani homered, singled, scored three runs and drove in three to lead the Los Angeles Angels to a 7-2 victory over the Texas Rangers Saturday night in Arlington, Texas.

Ohtani, who hit 46 home runs last year, hit his first two homers of the season Friday night and followed it up with a two-run blast in the eighth inning Saturday that gave the Angels bullpen a cushion.

Angels right fielder Taylor Ward, after missing the first week of the season because of a strained groin, had two hits including a home run in his first game of the season.

Max Stassi drove in two runs, and Tyler Wade and Jared Walsh each had two hits for Los Angeles, which has won four of its last five games.

Angels starter Noah Syndergaard (2-0) had his second strong outing in a row, giving up two runs and five hits in six innings. He struck out four and did not walk a batter while making 82 pitches.

Angels reliever Archie Bradley pitched the seventh and eighth innings and retired all six batters he faced, striking out three.

Hearn allowed only one baserunner through two innings before the Angels put together a rally in the third that was sparked by the bottom of the order.

No. 8 hitter Andrew Velazquez led off with a walk and went to second on the No. 9 hitter Wade’s bunt single. Velazquez continued to third on the play on second baseman Marcus Semien’s throwing error.

Ohtani grounded into a force play to drive in Velazquez, then went to third on a single by Mike Trout. Anthony Rendon’s sacrifice fly and Stassi’s RBI single increased Los Angeles’ lead to 3-0.

The Rangers got two runs back in the bottom of the third with Semien hitting an RBI double, stealing third and scoring on a groundout by Corey Seager. But the Rangers offense was shut down the rest of the way.