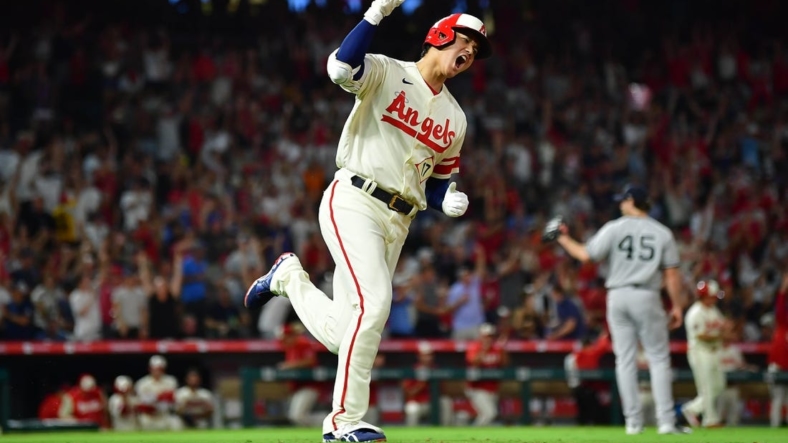 Shohei Ohtani’s three-run home run off Gerrit Cole in the sixth inning propelled the Los Angeles Angels to a 3-2 victory over the New York Yankees Wednesday night in Anaheim, Calif.

Ohtani hit a 98-mph fastball from Cole on a 2-0 pitch over the fence in center field that turned a 2-0 Angels deficit into a 3-2 lead. It was Ohtani’s 30th home run of the season, making him the first player in major league history to hit at least 30 homers and win at least 10 games as a pitcher (he has 11 wins on the mound).

Ohtani’s home run was enough because of the performance of Angels starter Patrick Sandoval and the bullpen. Sandoval (5-9) gave up two runs on just three hits and two walks in seven innings. He struck out seven while making 82 pitches.

He matched up with MVP candidate Aaron Judge three times, striking him out twice and walking him once.

Angels relievers Jose Quijada (eighth inning) and Jimmy Herget (ninth inning, fifth save) each pitched a scoreless inning to finish it off. It wasn’t easy for Herget, who began the ninth by walking both Judge and Giancarlo Stanton.

But he responded by striking out both Josh Donaldson and Gleyber Torres, then getting pinch hitter Oswaldo Cabrera on a grounder to shortstop to give the Angels two wins in the three-game series.

Sandoval and Cole (10-7) matched each other zero-for-zero for four innings before the Yankees broke through in the fifth.

Donaldson began the inning with a chopper down the third-base line that Angels third baseman Matt Duffy was unable to come up with, the ball bouncing into left field and Donaldson winding up with a double.

Donaldson took third on a wild pitch and then scored the first run of the game on a double by Torres. Torres moved to third on a fly out to center by Jose Trevino, then scored on a sacrifice fly by Aaron Hicks to make it 2-0.

Cole took the lead into the sixth inning, but lost the lead in part because he was betrayed by his defense. David Fletcher began the inning with an infield single, and he took second on third baseman Donaldson’s errant throw.

Mike Trout followed with a grounder to shortstop Isiah Kiner-Falefa, who booted the ball, giving the Angels two baserunners with no outs and setting the stage for Ohtani.

Cole threw a scoreless seventh but was finished, having thrown 97 pitches. He gave up three runs (two earned) on six hits and one walk. He struck out just four, his lowest total in his past 15 starts, going back to getting three strikeouts on June 9 against the Twins when he lasted only 2 1/3 innings.