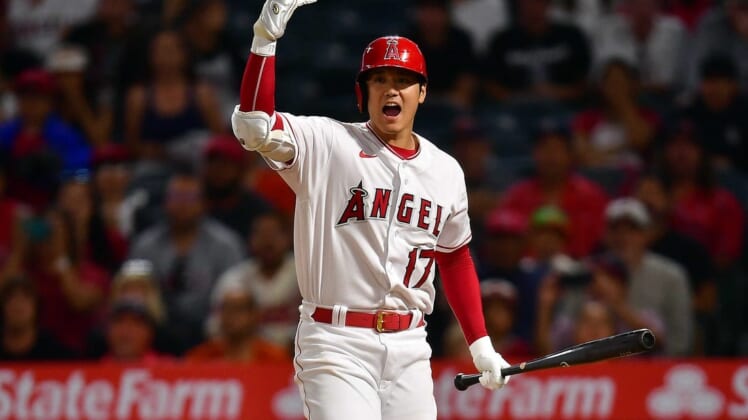 Shohei Ohtani will start for the host Angels on Wednesday night against the Houston Astros, his last appearance on the mound before next Tuesday’s All-Star Game in Los Angeles.

Ohtani has been named to the American League All-Star team for the second year in a row as both the designated hitter and a pitcher. Ohtani was the AL’s starting pitcher in last year’s All-Star Game; this year’s starter has not yet been named.

Ohtani, though, likely is to get the nod because of his role as the designated hitter — it would be difficult for him to get warmed up to come in as a reliever if he’s batting in the lineup.

“I’m not sure how it would work if he’s DHing and needs to ramp up, but I’m never worried about anything he’s going to do physically,” Angels interim manager Phil Nevin said. “He’s very mindful of what is good and bad for his body. He’s pretty impressive with what he does with his body.”

Said Ohtani: “I haven’t talked to anybody yet about when and where I’ll be playing in the All-Star Game. I will come up with my plan once I find out more.”

Angels center fielder Mike Trout’s status for Wednesday’s game is unknown. Recently named to his 11th All-Star team, Trout was removed from Tuesday’s game in the fifth inning because of upper back spasms.

Right-hander Cristian Javier (6-4, 3.01) will make his 13th start (17th appearance overall) for Houston this season. He’s coming off a loss in his last start, when he gave up five runs on four hits and three walks in five innings against the Kansas City Royals.

The Astros will be without designated hitter/left fielder Yordan Alvarez, who was placed on the injured list retroactive to Sunday with inflammation in his right hand.

“It’s gotten progressively worse,” Astros manager Dusty Baker said. “First, it was only bothering him to swing and miss, but then it was bothering him every swing after that.

“Hands are so important when you hit. The worst part of a hand injury is it bothers you in everything that you do. We’ve got to take care of it, or else it could linger for a long time.”