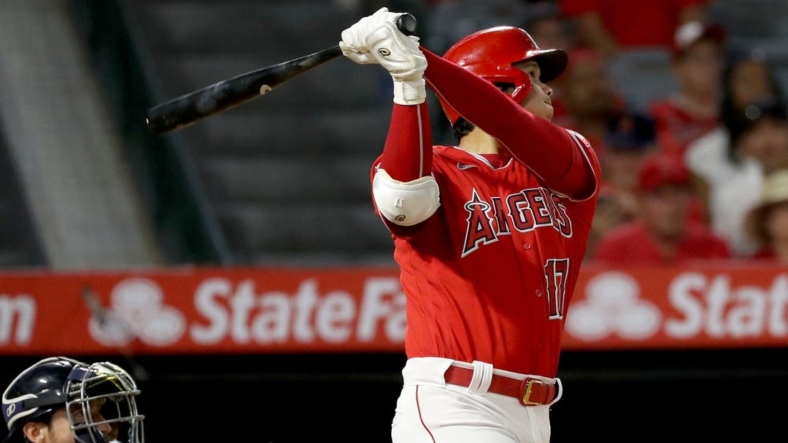 The Los Angeles Angels will oppose the Detroit Tigers on Tuesday night in Anaheim, Calif., in a contest that won’t affect the pennant race but could impact the American League MVP chase.

Angels two-way player Shohei Ohtani is putting up another MVP-caliber season, much like last year, when he won the award after he compiled 46 home runs, 100 RBIs, 26 stolen bases and a .965 OPS on offense while posting a 9-2 record with a 3.18 ERA in his 23 starts on the mound.

“What our guy does, until somebody can do that offensively and what he does on the mound, as far as value in this game and this league, I think it’s Shohei,” Angels interim manager Phil Nevin said of the MVP race.

Unlike some who might downplay the importance of an individual award, Ohtani acknowledges the MVP is important to him.

“It definitely leads to motivation to do better and try to go for that hardware,” Ohtani said through an interpreter. “It’s something I think about. But for the most part, I take it game by game and at-bat by at-bat. At the end of the day, we’ll count it all up.”

This season, Ohtani has a more definitive competitor for the award, New York Yankees slugger Aaron Judge. While Ohtani has become the first player in major league history to hit at least 30 homers and earn at least 10 wins on the mound in the same year, Judge could make history as well.

Judge hit his 54th homer of the season on Monday, 18 more than the next-highest total in the majors. The Philadelphia Phillies’ Kyle Schwarber is second with 36. There has not been as big a gap between the top two homer hitters at the end of a season in 94 years, when Babe Ruth hit 54 homers for the Yankees and Hack Wilson (Chicago Cubs) and Jim Bottomley (St. Louis Cardinals) each hit 31 in 1928.

Angels right-hander Mike Mayers (1-1, 5.17 ERA) will start on Tuesday, his 21st appearances of the season but just his third start. Since joining the rotation on Aug. 24, Mayers is 0-1 with a 5.00 ERA in outings against the Tampa Bay Rays and the Yankees.

He is 2-0 with a 5.40 ERA in five career games against the Tigers, all of them relief appearances last year.

Eduardo Rodriguez (3-4, 4.17 ERA) will make his 12th start of the season for Detroit. The left-hander is coming off a loss his last time out, when he allowed six runs (five earned) in four innings against the Seattle Mariners on Thursday.

It was the first rough outing for Rodriguez since he returned after missing three months because of a family matter. He had two victories in two starts initially upon his return late last month.

Rodriguez is 2-2 with a 6.62 ERA in four career starts against the Angels. He beat Los Angeles by firing five effective innings in a 4-0 win on Aug. 21 in Detroit.

The Tigers have lost three games in a row and six of seven, and they are averaging just 2.1 runs in that seven-game span.