Shohei Ohtani comes up big in Angels’ victory over Marlins 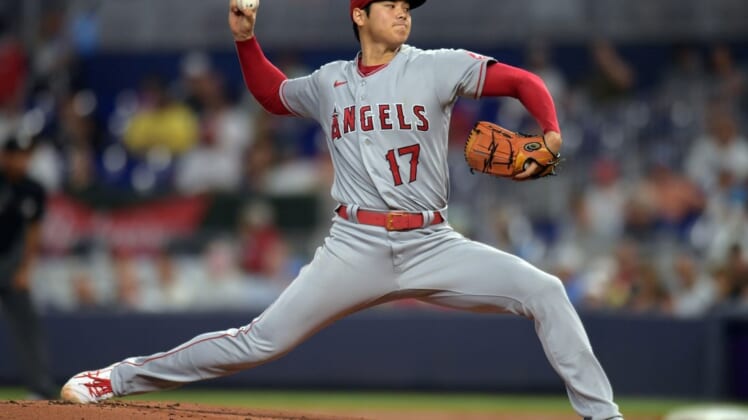 Shohei Ohtani gave up one unearned run in seven innings on the mound and had a two-out, two-run single at the plate that gave the Los Angeles Angels the lead for good in a 5-2 victory over the Miami Marlins Wednesday night at LoanDepot Park.

The win ended the Angels’ losing streak at four games, while the Marlins’ winning streak was halted at six.

An error by Angels shortstop Luis Rengifo in the first inning resulted in the Marlins’ lone run of the game against Ohtani, who has not allowed an earned run in 28 2/3 innings, going back to the fifth inning of a game against the Boston Red Sox on June 9.

In all, Ohtani (8-4) gave up two hits and walked three while striking out 10 and making 100 pitches.

At the plate, Ohtani’s single with two out and the bases loaded in the fifth inning drove in two and snapped a 1-1 tie. He also walked once, scored a run and stole a base. He became the first player in major league history ever to have 10 strikeouts, two RBIs and a stolen base in a game.

Jon Berti led off the Marlins’ half of the first with a ground ball to Rengifo, whose throwing error allowed Berti to reach safely. Berti went to third on a double by Joey Wendle, then scored on a sacrifice fly by Garrett Cooper.

Marlins starter Trevor Rogers (4-7) held the Angels scoreless on one hit over the first four innings before the Angels broke through in the fifth. The Angels loaded the bases on an infield single, a double and hit batter with two out, bringing up Mike Trout.

Rogers got ahead in the count 1-2, but hit Trout on the right knee with a pitch, forcing home a run to tie the game at 1-1. Ohtani followed with an opposite-field single to left, scoring two for a 3-1 Angels lead.

The Angels added to their lead in the seventh on RBI singles by Taylor Ward and Rengifo to take a 5-1 lead.