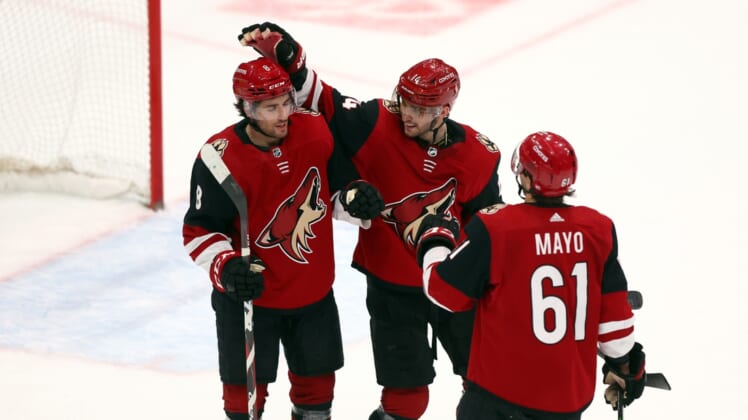 Shayne Gostisbehere shook off a second-period injury and scored the game-winning goal with 14.7 seconds left in overtime as the Arizona Coyotes beat the host Chicago Blackhawks 3-2 on Sunday night.

After Patrick Kane went off for high-sticking Gostisbehere with under a minute left in overtime, the defenseman slid a shot that clipped Chicago captain Jonathan Toews’ left skate and went in for a power-play winner.

Andrew Ladd — a Stanley Cup winner with Chicago in 2010 — was back in Arizona’s lineup for the first time since Feb. 20 after suffering a lower-body injury.

Kane scored on the power play, and Dylan Strome found the net for the Blackhawks (24-35-11, 59 points). Alex DeBrincat assisted on both goals.

Seth Jones’ helper on Kane’s marker was the defenseman’s 42nd, setting a career high for a season. He had 41 with Columbus in 2017-18.

Kevin Lankinen made 32 saves but fell to 0-2-2 in his past four starts as the Blackhawks lost their fifth straight (0-3-2) to open a five-game homestand.

After a pregame ceremony honoring Toews for reaching 1,000 career games Thursday, DeBrincat gloved an Arizona pass in the neutral zone, sent it to his stick and fed Strome for an early goal. It was Strome’s 20th of the season.

Inside the second period’s first minute, Sam Lafferty’s shot clicked off the blade of Gostisbehere and struck the defenseman in the neck area. He dropped to the ice but eventually was able to walk to the dressing room on his own.

The Coyotes took advantage of a Chicago turnover to level the score at 1-all at 6:25. Anton Stralman kept in an attempted clear and sent a pass into the slot that Carcone chipped in off the right post for his second goal.

Boyd gave the visitors their first lead when he slickly stick-handled through the left circle and whistled his 13th tally past Lankinen on the glove side. Back from his injury, Gostisbehere passed off the primary assist on the go-ahead score.

In the third at 5:33, Kane zipped in a long shot on Chicago’s third power play for his 22nd goal to tie the game again.