Sharks rally to knock off Coyotes 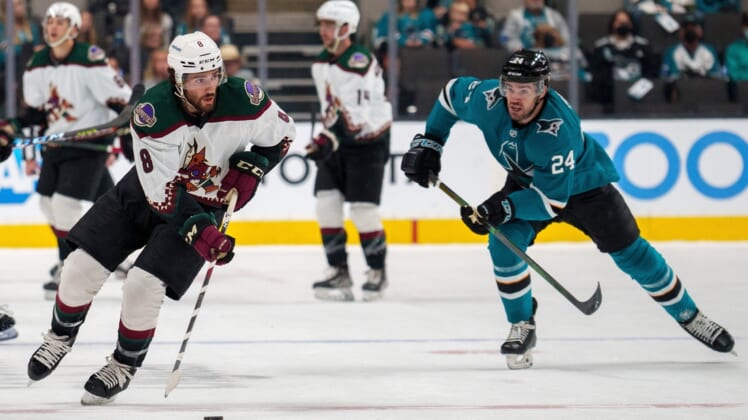 Timo Meier and Noah Gregor scored 44 seconds apart late in the third period as the San Jose Sharks rallied to snap a three-game losing streak with a 4-2 victory over the visiting Arizona Coyotes on Sunday afternoon.

Nick Bonino and Rudolfs Balcers, who sealed it with an empty-netter with 49.7 seconds left, also scored for San Jose as it closed to within 10 points of Vegas for final wild-card spot in the Western Conference. Gregor also had an assist while James Reimer made 23 saves.

Phil Kessel and Crouse each had a goal and an assist for Arizona, which lost for only the third time in its last nine games. Karel Vejmelka finished with 25 saves.

San Jose needed only 20 seconds to take a 1-0 lead on the first shift of the game. Gregor carried the puck into the Arizona zone and fired the puck behind the goal where he retrieved it and then passed to Andrew Cogliano stationed in the right circle. Cogliano then flipped a wrist shot toward the net that Bonino deflected inside the right post for his eighth goal of the season.

Arizona, which came into the contest averaging 5.3 goals per game in March, tied it with 2:00 remaining in the second period on Kessel’s first goal since Feb. 9. Crouse set up the score with a rush up the left wing and then passed to Kessel, who was left alone by the right side of the goal. Kessel, playing in his 962nd consecutive game, then easily tapped it into an open net for his seventh goal of the season and 13th in his last 11 games against San Jose.