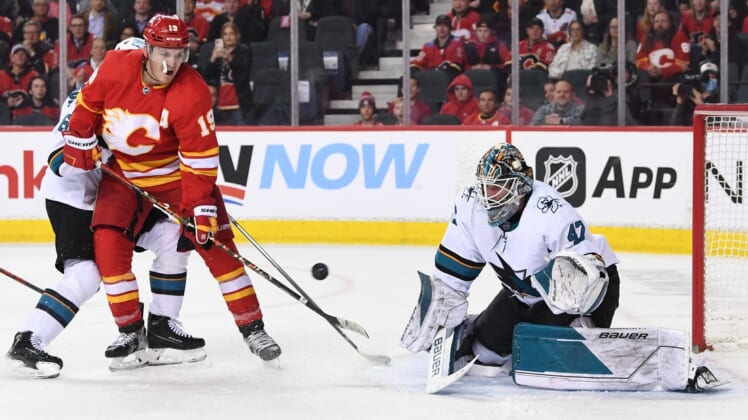 Alexander Barabanov and Logan Couture each scored within a 28-second span in the third period to spark a 4-3 comeback win for the San Jose Sharks over the host Calgary Flames on Tuesday.

Barabanov had a goal and an assist in the game, scoring his 10th tally of the season at the 11:07 mark of the final frame.

That goal tied the score, and Couture quickly followed with the go-ahead goal at 11:35 after the Sharks continued to pressure in Calgary’s zone. Goalie Jacob Markstrom made a big save on Noah Gregor, but Couture’s rebound shot squeaked the puck over the line.

It was San Jose’s second rapid-fire comeback in as many games. Trailing the Arizona Coyotes 2-1 with less than five minutes remaining on Sunday, the Sharks scored twice within a 66-second margin in an eventual 4-2 victory.

The Sharks have won all three games against Calgary this season. San Jose has dominated the rivalry in recent years, with a 12-3-0 record against the Flames over the last 15 meetings.

Calgary suffered its a rare setback on home ice, as the Flames were 15-1-2 in their previous 18 home games.

Marc-Edouard Vlasic and Timo Meier scored for San Jose’s other goals. Meier left the game with an apparent leg injury late in the third period.

James Reimer stopped 28 of 31 shots, including multiple huge saves when the Flames were pressing for the equalizer in the final two minutes. Reimer also denied Johnny Gaudreau on a penalty shot in the second period.

Calgary would have taken a 4-1 lead had Gaudreau found the net on the penalty shot, but instead, San Jose scored the game’s next three goals.

Gaudreau had a goal and an assist for Calgary, and Matthew Tkachuk had two assists. Mikael Backlund and Dillon Dube also scored for the Flames.

Markstrom stopped 34 of 38 shots, though the goalie looked shaky on the Sharks’ first two scores.