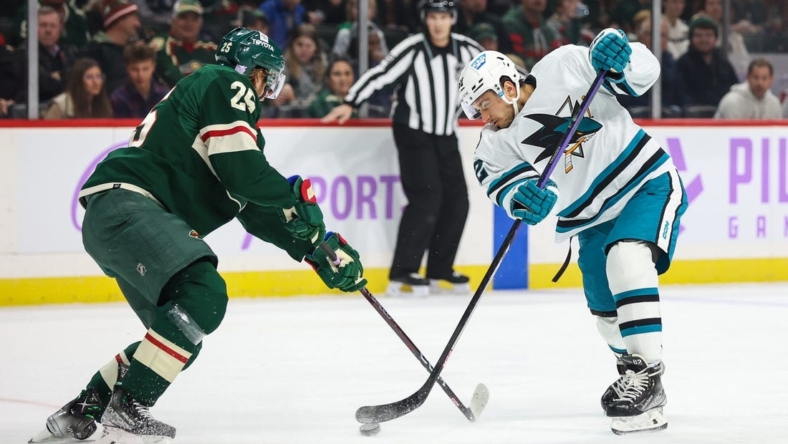 Steven Lorentz and Nico Sturm scored in the third period to help the San Jose Sharks overcome a two-goal deficit before beating the Minnesota Wild in a shootout to win 3-2 Sunday night in Saint Paul, Minn.

San Jose trailed 2-0 when Lorentz put home the rebound of his own shot with 6:04 remaining in regulation. Less than two minutes later, ex-Wild center Sturm drove the puck by screened Minnesota goaltender Filip Gustavsson (35 saves) to tie the contest with his sixth goal of the season.

Nick Bonino and Alexander Barabanov each scored in the shootout, and James Reimer (28 saves) stopped two of Minnesota’s chances for the Sharks.

The Sharks, who won 5-4 at Dallas on Friday, posted consecutive victories for the first time this season, and four of San Jose’s five wins this season have come on the road.

Frederick Gaudreau scored within the first seven minutes of the game for Minnesota, which padded its advantage in the third when San Jose star Erik Karlsson fell down with the puck near the blue line on a power play. That immediately led to Connor Dewar converting the short-handed goal off a two-on-zero chance with Mason Shaw 3:37 into the final frame of regulation.

The Wild were trying for a season-high third straight victory. Instead, they had to settle for a single point while dropping to 2-4-1 at home.

Minnesota recorded nine of the game’s first 10 shots on goal, but the Sharks’ offense woke up later in the period. Gustavsson, though, thwarted Timo Meier on a breakaway and got in front of Sturm’s point-blank push shot. The Sharks’ Logan Couture also hit the post during the final 40 seconds of the opening period.

San Jose continued to push in the second, recording 10 shots on goal, but had nothing to show for it after 40 minutes. Minnesota also had chances to extend its lead, posting 12 shots on target in the middle frame, but Reimer was stout enough to keep it a one-goal game.