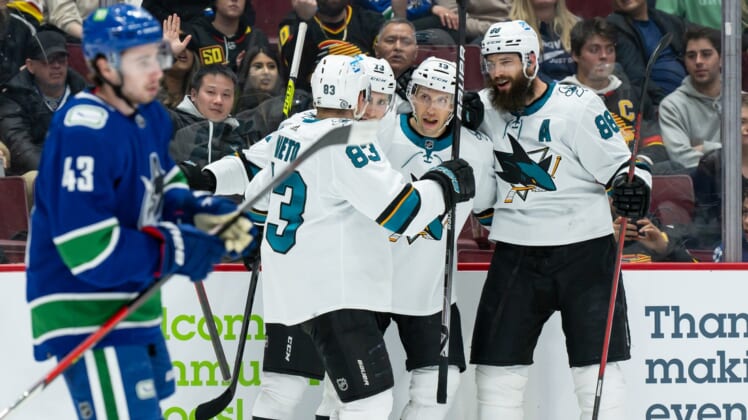 The San Jose Sharks will try to snap a 10-game losing streak when they host the Columbus Blue Jackets on Tuesday night.

Four of the 10 losses, including three of the last four, have come after regulation for the Sharks (29-34-12, 70 points), who come in off a 5-4 overtime loss at Minnesota on Sunday. The other loss was by one goal, 2-1, on Saturday at Dallas, which came after a shootout loss at Chicago.

San Jose looked like it might snap the losing streak when Nick Bonino’s short-handed goal early in the third period gave them a 4-3 lead against the Wild. But Kevin Fiala tied it with a goal midway through the period and Minnesota then pulled out the victory when Jared Spurgeon deflected Fiala’s shot past James Reimer for the winner 1:05 into overtime.

“It’s crazy how close we are on a lot of nights,” San Jose coach Bob Boughner said. “I’ve never been through anything like this as a coach or as a player, losing this many games.”

Only expansion Seattle (24-44-6, 54 points) has fewer points in the Pacific Division than the Sharks. But Boughner said he couldn’t fault his team’s effort this season.

“The first thing as a coach you want your team to do is play hard, be competitive, be hard to play against,” Boughner said. “Those things are all happening. That’s a real important part. The rest will follow. It’s a process here and we said this over the last two years, it’s slow and it’s painful sometimes, but there’s things going on that are good.”

One bright spot in the loss at Minnesota loss was the debut of 20-year-old center Thomas Bordeleau, who picked up an assist on Rudolfs Balcers’ goal in the first period.

“He did a lot of good things,” Boughner said of Bordeleau, a former Big Ten Freshman of the Year at Michigan. “He slows the game down, makes high-end skill plays.”

Columbus (35-35-6, 76 points) will be wrapping up a three-game California road trip that began with a 2-1 loss at Los Angeles on Saturday. That loss, which officially eliminated the Blue Jackets from the Stanley Cup playoffs, was followed by a 6-4 loss at Anaheim on Sunday night.

Despite being eliminated from postseason play with the loss to the Kings, goaltender Elvis Merzlikins, who had an 11-start streak snapped Sunday, said his team won’t pack it in the rest of the way.

“We are not giving up,” Merzlikins said. “We are going to play until the last game. Whatever our situation is, we are not going to give up. We are not just going to go and just skate around and shoot pucks.

“We are not a beer league team. We are a professional hockey team. We like to fight, we like to compete. It’s obviously a learning process for us, and it’s always nice to fight and fight back.”