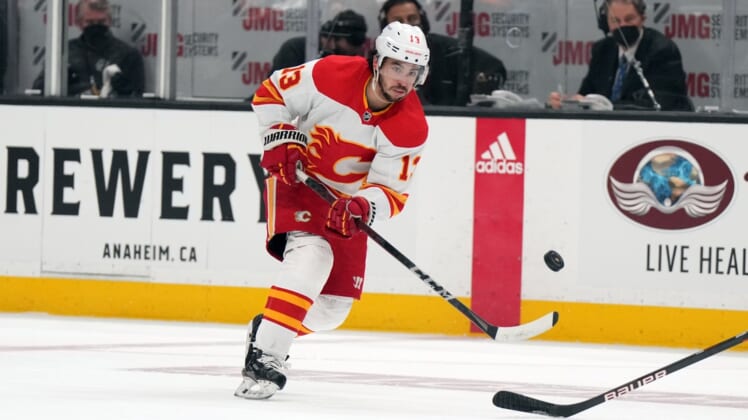 Two victories to kick off a four-game road swing have the Calgary Flames feeling good about themselves heading into a Thursday clash with the San Jose Sharks.

The Flames (42-19-9, 93 points), who are six points ahead of the Edmonton Oilers in the chase for the top spot in the Pacific Division, certainly appear back on track from the three-game skid that ended their most recent homestand. After opening the trip with a 3-2 win over the Los Angeles Kings on Monday, the Flames beat the Anaheim Ducks 4-2 on Wednesday.

The Sharks (29-31-9, 67 points) have won all three meetings with Calgary so far this season, scoring at least four goals each time, so the Flames know a California sweep won’t be easy.

“Big points. Big game,” Flames goaltender Jacob Markstrom said. “It’s all about winning this time of the year. It’s a lot of hockey, and we’re having fun. It’s fun winning again. We had a little rough stretch, but now we’re good.”

The Flames, who have a dozen games remaining in the regular season, will conclude their road swing on Saturday against the Seattle Kraken, the first half of a home-and-home series.

As much as Wednesday’s win was celebrated for rarely used defenseman Michael Stone scoring his first goal of the season in a two-point effort during his 500th career game (“I think I hit every defenseman on their team at least once, so it was nice to hit the net,” Stone quipped about his goal), as well as Trevor Lewis skating in his 800th career contest, the focus going forward is team-oriented.

San Jose, which is coming off a 2-1 overtime loss to the visiting Edmonton Oilers on Tuesday, is winless in four games (0-3-1) and has managed only three victories in its past 11 outings (3-6-2).

It’s been a rough time over the past few weeks, although the Sharks probably deserved a better fate against the Oilers. They outshot Edmonton by a 32-24 margin and would have been in a better position than holding a one-goal lead through two periods had it not been for strong goaltending from the Oilers’ Mike Smith.

“That’s one of our best, most solid games in a long time, and a little bit the story of our year,” San Jose coach Bob Boughner said. “We had so many chances. Smith plays great and you can’t get that second goal that you need and change the whole face of the game. And that’s a team that takes advantage of things.

“But I will say, looking at the game itself, we did so many great things, and that’s encouraging. That was our best game we’ve played in a long time.”

In fact, the Sharks were in control and in a golden position to take a two-goal lead midway through the third period, but they surrendered a tide-turning, short-handed goal.

“Lately, we’ve given up too much. We allow too many chances on our power play,” said forward Tomas Hertl, San Jose’s lone goal-scorer. “I know we get one (power-play) goal, but it just can’t happen. Our special teams must be really strong if we want to win some games.”