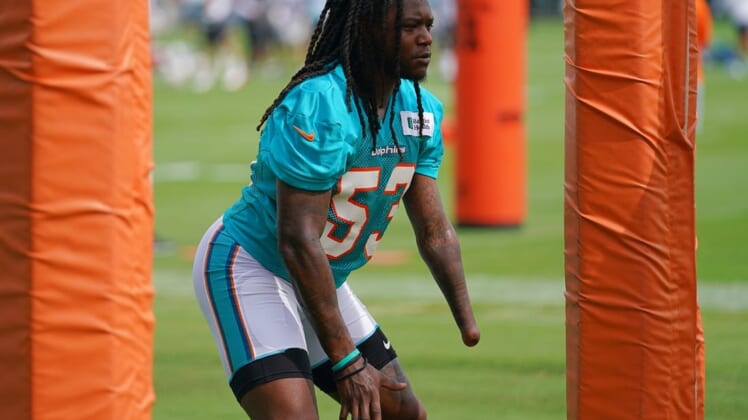 Shaquem Griffin is retiring from the playing field and moving into a role with the NFL.

Griffin, the only known one-handed player in NFL history, wrote for The Players’ Tribune on Wednesday that he was ready to retire and embrace his “Plan A.”

A fifth-round pick in the 2018 NFL Draft following a stellar career at UCF alongside twin Shaquill Griffin — and a sparkling individual performance at the Scouting Combine — the linebacker spent three seasons with the Seattle Seahawks and played in 46 games. He spent the 2021 offseason with the Miami Dolphins.

Shaquem Griffin was primarily a special teams player but had one sack and six quarterback hits to go along with 25 tackles.

Griffin said his “Plan A” was always to help people, and after a conversation with NFL commissioner Roger Goodell at the Super Bowl in February, he decided the time was now.

The 27-year-old, who had his left hand amputated at age 4, wrote he plans to “go build something new so I can do what Dad always told us to do: leave the world a better place than when we found it.”

In his role with the NFL Legends Committee, Griffin said he will work with future and former players as well as current NFL players and employees. The scope of his position will be vast, including offering help on transitioning into and out of the league, guidance with mental health circumstances and beyond.

“I know the positive effect I’m having on others. I’m speaking at colleges and universities, talking to football teams and even presenting to corporate America about never doubting yourself and tirelessly pursuing your dreams,” Griffin said Wednesday on “Good Morning Football.”