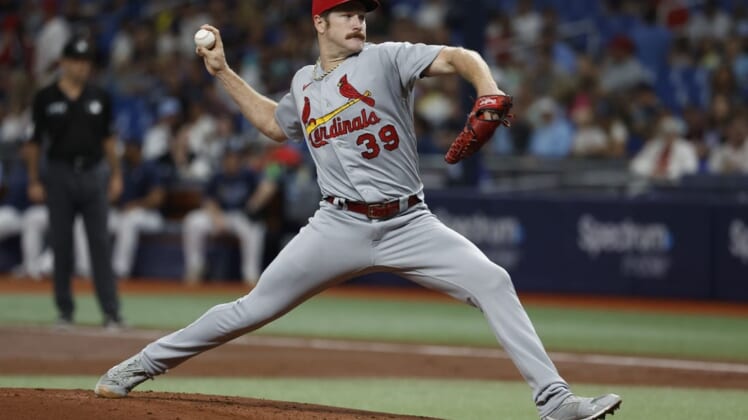 After winning 4-2 on a 10th-inning walk-off homer Tuesday and in an 11-3 rout Wednesday, the Rays received an outstanding start from McClanahan (7-2) to notch the sweep and finish 4-2 on their six-game homestand.

The left-hander allowed an unearned run on two hits, while striking out nine and walking one. He increased his major-league-leading strikeout total to 98.

Ji-Man Choi slugged a two-run homer, and Kevin Kiermaier went 2 for 3 to account for the Rays’ three hits.

Paul Goldschmidt walked and scored in the sixth inning to move his on-base streak to 45 games — the longest by a Cardinal since Matt Holliday reached 47 over the 2014 and 2015 seasons.

Mikolas and McClanahan were sharp their first time through the batting order, with only Albert Pujols managing a hit — a pop-fly double that second baseman Vidal Brujan overran to lead off the second inning.

Also reaching a dozen starts like his counterpart, McClanahan cruised through the Cardinals the first time around by striking out five of the 10 batters he faced.

Meanwhile, Mikolas retired all nine batters against him until leadoff hitter Kiermaier opened the fourth inning with a single to right. One batter later, Choi lashed Mikolas’ 1-0 inside sinker out to right for a 2-0 lead. The deep shot was his fifth this season and extended his hitting streak to nine games.

In the sixth, after a two-out walk to Goldschmidt and a single by Nolan Arenado, McClanahan attempted to field Pujols’ soft comebacker with his bare hand, muffing the ball. He then mishandled it with his glove in an attempted to pick it up, then threw wildly past first baseman Choi to send home Goldschmidt.

Jason Adam relieved McClanahan in the ninth and immediately walked Arenado. But he struck out pinch hitter Nolan Gorman and got Tyler O’Neill to ground into a double play to Brujan to end the game for his second save.