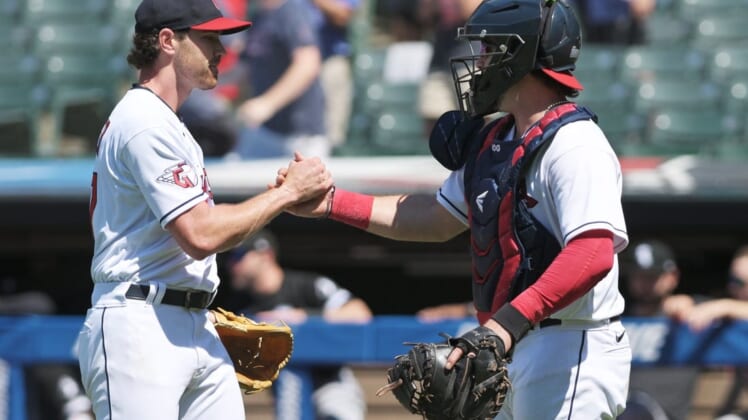 Shane Bieber was superb in throwing a three-hit complete game in the Cleveland Guardians’ 4-1 victory over the visiting Chicago White Sox in the first game of a doubleheader on Tuesday.

It was the 17th complete game in the majors this year.

Bieber (4-5) lost his shutout in the seventh. He allowed singles to Andrew Vaughn, Jose Abreu and Eloy Jimenez.

Bieber struck out seven and didn’t walk a batter. He threw 95 pitches, 72 for strikes.

“I’m happy,” Bieber said in a postgame television interview. “I felt like I wanted to bounce back after my last outing.”

The Guardians got on the scoreboard in the third inning off losing pitcher Davis Martin. The three-run rally started with a one-out infield single by Austin Hedges. After a two-out single by Steven Kwan,
Hedges came home on a double by Amed Rosario. Both Kwan and Rosario scored on a single by Jose Ramirez for a 3-0 advantage. Ramirez leads the American League with 68 RBIs.

Bieber retired 11 in a row until Owen Miller dropped a throw from Rosario at first base with one out in the fifth. It was Miller’s eighth error on the season. Gavin Sheets, though, was quickly erased on a double play.

The Guardians added an insurance run in the fifth. Myles Straw walked with one out, the first free pass of the game. He sped home on Rosario’s two-out double into the gap in right center. It was
Cleveland’s 10th two-out hit of the series. Rosario was 2-for-4 with two doubles, two RBIs and a run.

It was significant, too, as Bieber has won 31 consecutive games when the Guardians have scored four or more runs.

Chicago broke through with a run in the seventh. Bieber hit Vaughn in the elbow and it came back to haunt him. Abreu and Jimenez followed with singles to ruin Bieber’s shutout bid.