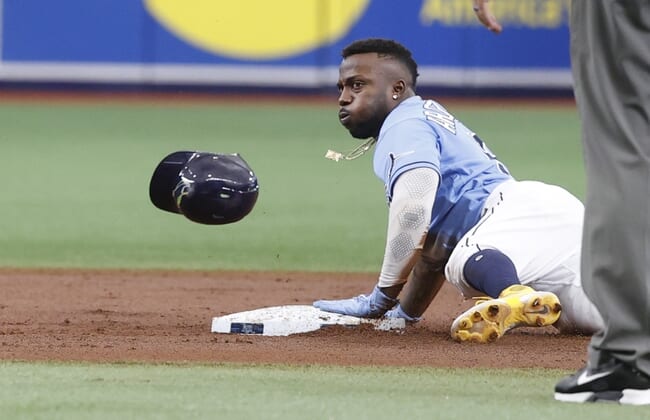 Making his second career start, the rookie Baz (2-0) was again impressive in dominating the visitors from South Florida.

He yielded just three hits and a walk while striking out nine over 82 pitches.

Franco, 20, doubled in his first at-bat to push his streak to 41 consecutive games reaching base. He is two games from tying Frank Robinson’s 43-game streak from 1956, the longest ever by a player under 21.

The rookie shortstop also tripled in a 2-for-4 outing that included two runs. Nelson Cruz drove in two runs.

The American League East champion Rays (97-59) tied the franchise record for most wins in a season set in 2008 and are 38 games over .500 for the first time ever.

Joe Panik and Jazz Chisholm Jr. each had two-hit games with a double for the Marlins (64-91). Lewin Diaz notched his seventh homer.

Starter Jesus Luzardo (5-9) was tagged for two runs and two hits in four innings, striking out five and walking two.

After Baz struck out the side swinging in the first, Franco stretched his streak with a double off the wall in left to advance Manuel Margot (leadoff walk) to third.

Cruz and Yandy Diaz then produced sacrifice flies as the Rays led 2-0.

Baz, 22, was overpowering his first time through Miami’s order.

He retired all nine batters he faced and fanned six — five swinging and one looking — before Chisholm finally produced a hard single up the middle to open the fourth.

The southpaw Luzardo settled down after the two-spot in the first and retired nine straight.

The streak ended when Diaz reached in the fourth on a one-out throwing error by third baseman Eddy Alvarez, but Luzardo stranded two in scoring position by whiffing Francisco Mejia on a 96 mph fastball.

In the fifth with two outs and the bases empty, Franco ripped his fifth triple into left-center and Cruz notched his second RBI with a single to left.