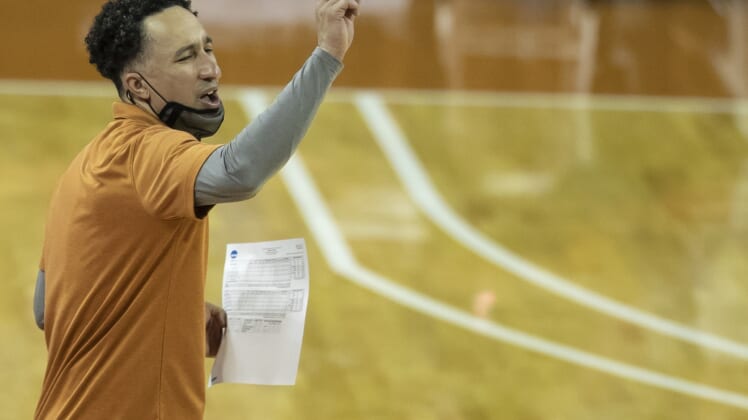 Feb 2, 2021; Austin, TX, USA; Texas Longhorns head coach Shaka Smart calls out a play to his team against Baylor Bears in the second half of an NCAA college basketball game at the Frank Erwin Center onTuesday, Feb. 2, 2021, in Austin,TX. The Baylor Bears beat the Texas Longhorns 83-69. Mandatory Credit: Ricardo B. Brazziell-USA TODAY Sports

Shaka Smart is nearing a deal to leave Texas and become the head coach at Marquette, multiple outlets reported Friday.

Smart, who turns 44 next month, guided the Longhorns to a 19-8 record and a Big 12 tournament championship this season before losing to No. 14 seed Abilene Christian in the first round of the NCAA Tournament.

He would replace Steve Wojciechowski, who was fired last week after seven seasons with the Golden Eagles.

Texas also got knocked out of the NCAA Tournament in the first round in both previous appearances under Smart, falling to No. 11 seed Northern Iowa in 2016 and No. 7 seed Nevada in 2018.

Moving on to Marquette would be a trip home for Smart, who grew up in Wisconsin.

Smart was hired in Austin after a stellar six-season run at VCU, where he compiled a 163-56 record from 2009-15 and led the Rams to five consecutive NCAA tourneys — including a Final Four run as a No. 11 seed in 2011.