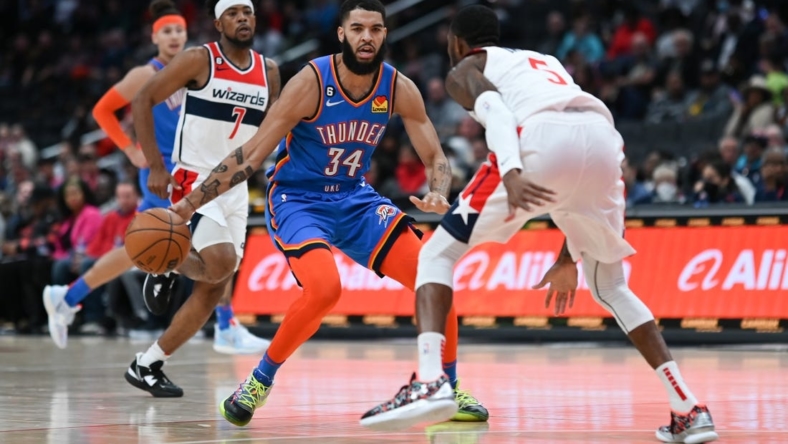 Shai Gilgeous-Alexander capped a 42-point performance by draining a 3-pointer with 1.9 seconds remaining in the fourth quarter to lift the visiting Oklahoma City Thunder to a 121-120 victory over the Washington Wizards on Wednesday.

Gilgeous-Alexander’s heroics came on the heels of Bradley Beal sinking a fadeaway jumper near the baseline that gave Washington a 120-118 lead with 6.7 seconds remaining.

Gilgeous-Alexander also had seven assists and six rebounds. He made 14 of 21 shots from the floor, including 12 of 17 from the foul line.

Luguentz Dort scored 16 points and Josh Giddey added 11 points and six rebounds for the Thunder, who overcame 17- and 16-point deficits to record their third win in four games.

Kristaps Porzingis collected 27 points and nine rebounds and Beal scored 15 of his 25 points in the fourth quarter. Beal was making his return from a five-game absence due to NBA health and safety protocol.

Kyle Kuzma recorded 18 points, 10 rebounds and nine assists for the Wizards, who saw their four-game winning streak come to a halt.

Rui Hachimura scored 14 points off the bench for Washington.

Washington built a 31-14 lead in the first quarter due in large part to its sharp shooting from the perimeter. Gilgeous-Alexander scored seven points in just over one minute late in the quarter to spark Oklahoma City, which erased the deficit by pulling even at 37-37 early in the second.

The Wizards once again found their stroke from the perimeter to build a 16-point lead in the second and they claimed a 67-54 advantage at halftime. The Thunder countered as Gilgeous-Alexander scored 19 points during the third quarter to give his team a two-point advantage.