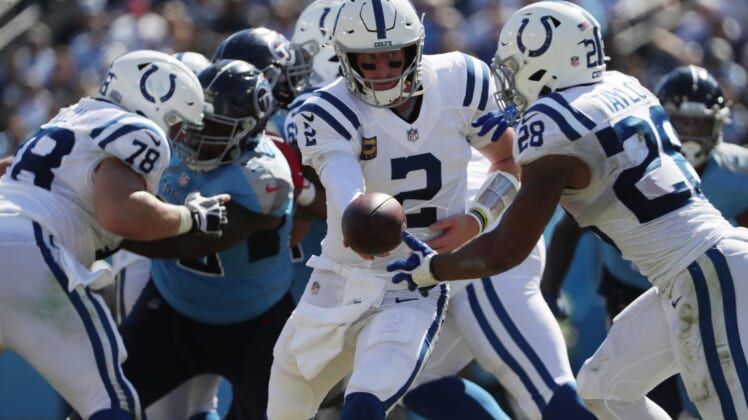 Carson Wentz hands off to running back Jonathan Taylor during second half action on Sunday, Sept. 26, 2021, at Nissan Stadium in Nashville.Indianapolis Colts And Tennessee Titans At Nissan Stadium In Nashville Tenn Sunday Sept 16 2021 In Nfl Week 3

Seven of the Indianapolis Colts’ 22 starters did not practice Thursday, three days out from their road contest at the Miami Dolphins.

Quarterback Carson Wentz, however, was able to practice on a limited basis for the second straight day as he deals with two sprained ankles.

Right guard Mark Glowinski (knee) went from limited participation in Wednesday’s practice to being held out of Thursday’s, meaning there’s danger that Indianapolis could be down three of its starting offensive linemen come Sunday.

It wasn’t all dire news for the Colts. Left tackle Eric Fisher was back to full participation after a rest day Wednesday, and Pro Bowl linebacker Darius Leonard (ankle) returned to practice on a limited basis. Running back Jonathan Taylor (knee) remained limited for the second straight day.