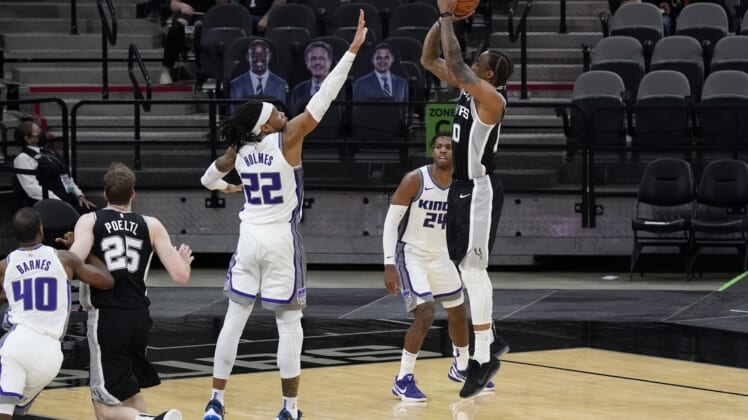 DeMar DeRozan poured in 26 points, one of seven San Antonio players to score in double figures, as the host Spurs got back on track with a 120-106 win over the Sacramento Kings on Wednesday in the second of two consecutive games between the teams.

Sacramento won the first game 132-115 on Monday, but the Spurs rebounded in a big way thanks to a balanced attack and improved defense. San Antonio led by 16 at the half and by 23 with five minutes left in the third quarter, and the Kings never drew closer than 13 points in the final period.

Derrick White hit for 18 points while Rudy Gay scored 16, Jakob Poeltl, Dejounte Murray and Patty Mills hit for 12 apiece, and Keldon Johnson added 11 points for San Antonio. The Spurs have won two of their past three games but are just 2-4 on their current nine-game homestand.

De’Aaron Fox led the Kings with 20 points, with Tyrese Haliburton scoring 18, Delon Wright adding 16 points and Buddy Hield hitting for 14, all in the second half.

San Antonio led 33-27 after a back-and-forth first quarter and took control of the game in the second period, roaring to a 67-51 lead in the final minutes of the half via a 9-0 run.

The Spurs led 69-53 at halftime, outshooting the Kings 53.2 percent to 41.9 percent from the floor and hitting nine of their 18 shots from beyond the arc.

Gay led San Antonio with 13 points, while DeRozan had 12 points and seven assists, and White had 11 points for the Spurs in the first half.

Wright paced all scorers with 14 points off the bench in the first half for the Kings, with Haliburton scoring 13 and Holmes racking up 10.