The 2018 NFL Draft is now history after all 32 teams picked the rookies that best fit their needs. Out of those 32 teams, five enhanced their rosters by selecting rookie quarterbacks in the first round.

On the opposite side, some clubs passed on drafting quarterbacks, deciding it best to work with their current group. As things stand now, some franchises will look to hold quarterback competitions, while other teams will hope for the best with their veteran starters in place.

Crowded rosters, starters still on the mend and rookie egos bound to creep up make for seven awkward quarterback situations following the draft.

One quarterback room that just got a lot busier is that of the Ravens. The team traded with the Philadelphia Eagles for the 32nd pick and drafted Louisville’s Lamar Jackson. He joins a team that recently signed the embattled Robert Griffin III to back up Joe Flacco. The latter, of course, will start for Baltimore while Jackson takes time to evolve.

But, what happens if Flacco continues to regress? He’s been pretty bad for three years running now. RGIII would be next in line to step in. Or would he? Perhaps the Ravens get cold feet when it comes to Griffin, who has not played since 2016. Jackson comes to Baltimore with an element of excitement. He not only passed for 3,660 yards and 27 touchdowns in 2017, he also added 1,601 rushing yards and 18 touchdowns. If we actually see Jackson under center at any point, Flacco and RGIII are going to look like chumps.

The Bills did as most expected and moved up from their No. 12 pick to select a franchise quarterback. But the quarterback they chose was Josh Allen, much to the dismay of UCLA’s Josh Rosen. Allen’s accuracy issues have been a hot topic of discussion. They were also red flags to other franchises that studied him. Over the course of three seasons at Wyoming, Allen averaged a completion rate of 56.2 percent.

Yet, the Bills made their choice and now have to live with it. Allen joins a team without much veteran leadership when it comes to its quarterbacks. AJ McCarron with three career starts is new to Western New York. And, second-year quarterback Nathan Peterman had a brutal rookie campaign. It’s worth mentioning that the Bills currently list Allen third on their depth chart.

This means the Bills are headed for a summer quarterback competition. Fans wishing to see Allen in action might be waiting well beyond Week 1 if he falls behind McCarron. 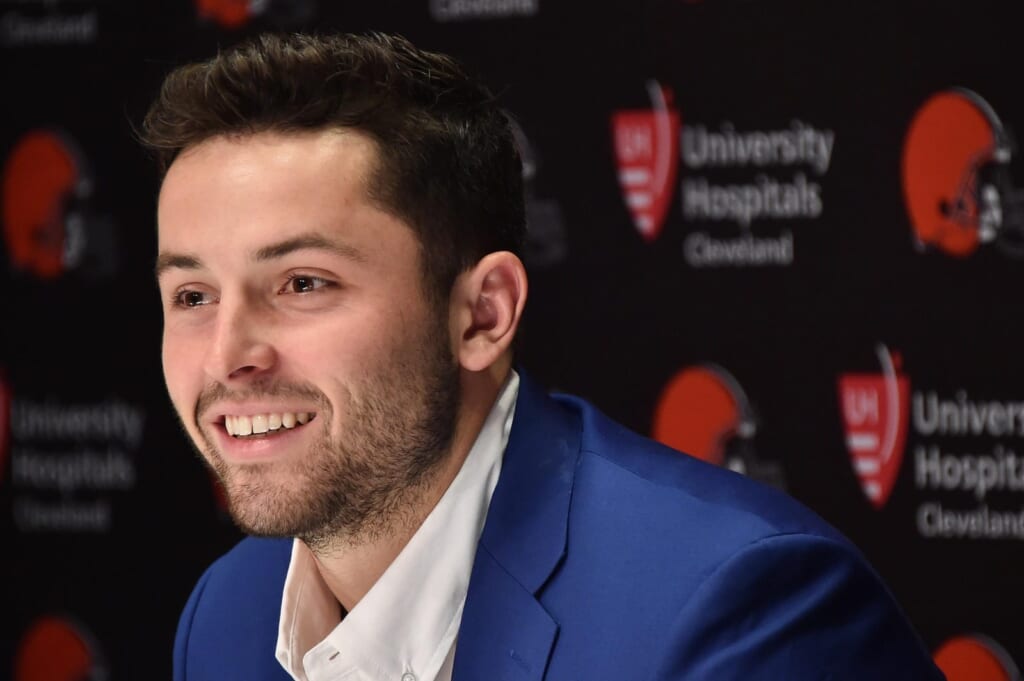 With the first pick in the 2018 NFL Draft, the Cleveland Browns selected Baker Mayfield. That was a move we considered to be a big winner. The Browns chose the best-overall quarterback among the top five prospects in this year’s draft.

But, the Browns also traded for Tyrod Taylor, whom the team confirmed would start while the rookie sits. This in itself is a bit awkward considering Mayfield is a first-overall pick. But, will this plan really stick? The last time the Browns started one quarterback and he played all season was in 2001 when Tim Couch was under center.

The Browns would have us believe that Taylor, with his 22-20 record, will be on the field all year. But, should five or six weeks go by and the Browns manage only one or two wins, or maybe zero, a switch to Mayfield would be in order. If for some reason Drew Stanton gets called to action, the Browns might as well throw in the towel.

We discussed crowded quarterback rooms earlier and that is exactly what the Jets now have. The Jets made their move for a quarterback as expected, and landed USC’s Sam Darnold with the third-overall pick. The 20-year-old USC product now joins veteran Josh McCown and Teddy Bridgewater. Let’s also not forget Darnold’s other quarterback teammates, Bryce Petty drafted in 2015 and Christian Hackenberg selected in 2016. Talk about a mixed bag.

Though, not all five quarterbacks will remain on the team’s final roster later this summer. Hackenberg and Petty are both likely to be released, and a recent report suggests that Bridgewater is not guaranteed a spot at this time.

A quarterback competition awaits this Gang Green bunch when the best man left standing (and not erased from the roster) will win.

Ahead of the draft, the Dolphins promised Ryan Tannehill he will be the starter even if the team chose a rookie quarterback. Talks of the franchise selecting a quarterback took place, but with the 11th overall pick, the team went another direction. Not only did the Dolphins pass on a Tannehill successor in the first round, they did not use any of their other seven picks to draft a quarterback either.

So, if Tannehill should experience any type of setbacks or fail to find his groove, Brock Osweiler would be the next man up. Behind Osweiler is second-year quarterback David Fales.

The Dolphins barely got by with Jay Cutler and Matt Moore last year. They are definitely taking another gamble considering Tannehill has not played since December of 2016 and Osweiler is just bad to the bone. It was no wonder we ranked the Dolphins the worst franchise in the league, ahead of the draft. 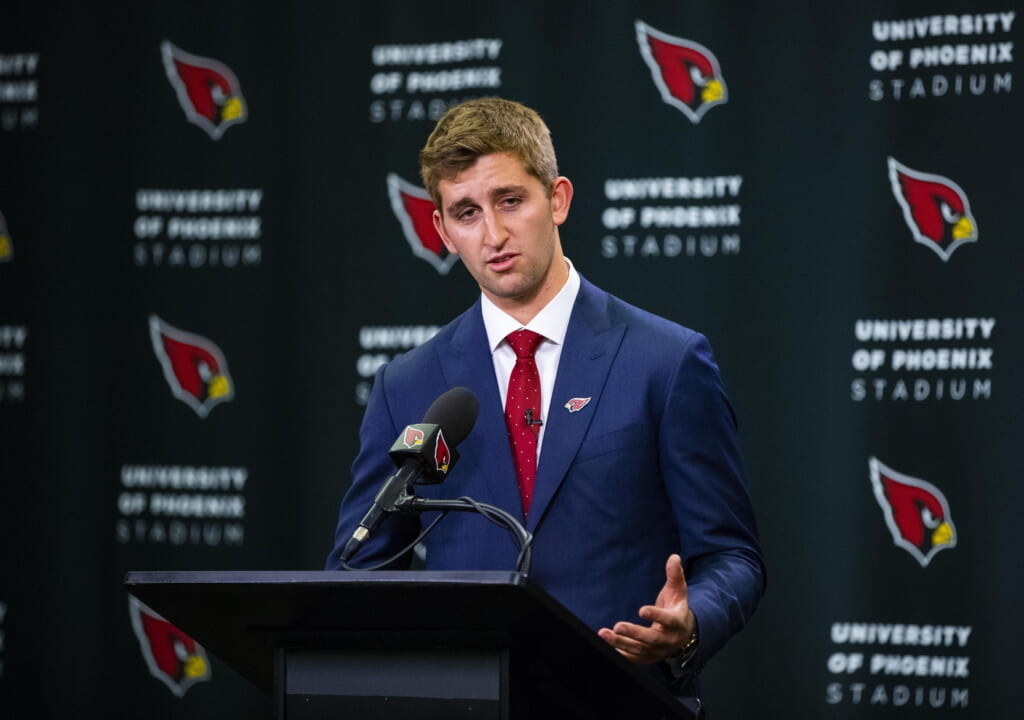 While UCLA quarterback Josh Rosen stewed in the green room after seeing three other quarterbacks get selected, the Cardinals were fast at work. Arizona traded up from No. 15 to the Oakland Raiders’ 10th overall pick to select Rosen. He is a great fit there now situated to learn under veteran Sam Bradford.

The Cards broke the bank on Bradford to the tune of $20 million knowing they might not be able to swing a trade to draft a rookie. Now they will be adding a pricey first-round rookie salary to their quarterback tab. Beyond Bradford and Rosen sits Mike Glennon. This is a fellow who has been resolved to sit in the back seat, just as he did last season when the Chicago Bears benched him in lieu of Mitch Trubisky.

It will be interesting to watch how the dynamics play out if the Cardinals decide to hold a quarterback competition. Rosen does not seem like a guy who would be content sitting on a bench and learning — even if it was just for a short time.

After missing their starter the entire 2017 season, The Colts are banking on Andrew Luck being healthy enough to play this year. But, Luck has yet to resume throwing with a full-sized football. This is somewhat of a scary fact heading into May. Though, the Colts remain committed to Luck and passed on drafting any other quarterback with their 11 picks in this year’s draft.

With that, Jacoby Brissett remains Luck’s backup. Luck, who recently said that he is “feeling really good,” has not played a regular-season game in nearly a year-and-a-half. Following the end of the 2016 season, Luck underwent shoulder surgery in January of 2017.

The assumption is Luck will eventually be cleared to practice and that he will play in 2018. But, will the Colts get the healthy version of him back, or the guy who struggled and put up a 10-12 record in 2015-16. Thankfully though, the Colts at least drafted two new guards to help keep their quarterback better-protected this year. Fans sure hope that guy is Luck, rather than a backup.