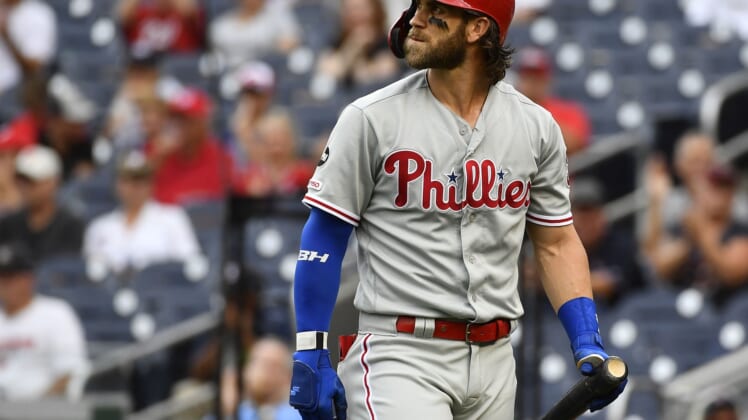 The MLB season is just around the corner and with players reporting for spring training, the work begins for some of the game’s biggest stars. For many of MLB’s stars, the pressure will be on from fans and the organization to step up and deliver on expectations in 2020.

Bryce Harper and Manny Machado were among the biggest signings in baseball just a year ago. After delivering underwhelming performances in 2019 and seeing their team fail to reach the postseason, both stars must find a way to take their game to a new level this season. The pressure to perform will be on other big names, too.

Whether you’re a star coming off a disappointing season or just signed a record contract, no excuses will be made for failure. Everything will be on the line this season and it all starts now. Here are the seven MLB stars who need to step up this season and deliver big performances for their teams.

While ticket prices soared after the Phillies signed Harper to a $330 million deal, the team did not. Philadelphia went 81-81 with Harper in 2019, just a one-game improvement from the previous season without him. Meanwhile, the Washington Nationals moved on from Harper and won the World Series.

It’s not that 35 homers and a .882 OPS were bad, but the Phillies paid Harper to be an MVP-caliber player. Harper must improve when there aren’t runners on base, a situation in which he posted a .719 OPS this past year. If the Phillies are going to contend in the division this season, Harper needs to step up with an MVP-like season. If he can do that, this team has a shot to hoist the World Series trophy.

It would be an understatement to call Sale’s performance in 2019 a disappointment. A year after finishing fourth in the AL Cy Young voting with a 2.11 ERA, his ERA more than double to 4.40. Coincidentally, it all came after the Red Sox signed him to a $145 million extension.

Sale will come into the season healthy after missing September with inflammation in his elbow. It’s a positive sign for the 30-year-old, but keeping the ball in the yard is crucial. Sale’s HR/9 soared from 0.63 in 2018 to 1.47 in ’19 and opponents hit him harder than ever. The upcoming season isn’t even about contending for the Red Sox, but they might need Sale to step up to rebuild some of his trade value.

The Mets enjoyed trolling the Seattle Mariners for trading them Robinson Cano and Edwin Díaz. A year later, Seattle gets the last laugh after Jarred Kelenic turned into one of MLB’s best prospects. Meanwhile, the Mets are stuck with Cano’s contract and a struggling closer.

Díaz has the best chance to turn things around in 2020. He struck out 39% of batters faced with the Mets, but he also surrendered 22 walks and 15 home runs in 58 innings. The hope is that new pitching coach Jeremy Hefner can get Díaz to his All-Star form. If he does, New York’s bullpen is outstanding and the Mets could win the division. Ultimately, it will be up to Díaz to master his command and prove he can still be trusted by a team with playoff hopes.

Seager looked like one of MLB’s future stars after combining for 48 homers, 188 runs scored and a .300/.369/.494 slash line in his first two seasons. Following an injury-riddled 2018 season and a rather disappointing ’19 campaign, the Dodgers need their star shortstop to return. There’s a reason the Dodgers aren’t ruling out a trade for Francisco Lindor even after landing Mookie Betts. A team with World Series aspirations needs the best from every player on their roster and .817 OPS isn’t good enough from Seager. The 25-year-old needs to step up his game and be the player we saw when he broke into the majors. Otherwise, the Dodgers won’t hesitate to replace him via trade.

Snell became one of the best stories in baseball in 2018 on his way to winning the Cy Young Award. Now he’s coming off a season with a 4.29 ERA and lingering questions about his durability. If the Rays are going to compete with the New York Yankees, they’ll need Snell’s best stuff in 2020.

There’s reason to believe Snell can rediscover his ace form. He actually increased his strikeout rate (33.3%) from his Cy Young season (31.6%) and maintained his walk rate. It might have been the mid-season elbow surgery that limited him in the first half (4.70 ERA) as he returned from the injured list with a 2.12 ERA after the All-Star Break. If Snell can return to that level, the trio of Tyler Glasnow, Charlie Morton and Snell could each contend for the AL Cy Young Award in 2020.

Signed to a $300 million deal in the same offseason as Harper, Machado fell far short of expectations for his first season. The star third baseman posted a .796 OPS, falling back into a player who struggled to make consistent contact.

The Padres can’t afford for Machado to play like an above-average player, they need a star. If the infield duo with Fernando Tatís Jr. is going to work and for this team to win 80-plus games for the first time in a decade, Machado needs to get it together. That means a .900-plus OPS with Gold Glove-caliber defense at third base. Anything less and concerns about him ever living up to his contract will intensify.

Yankees fans waited years for their team to finally land a top free agent. Cole can provide this team with everything they needed. He is an ace with the best stuff in the majors and is coming off a historically dominant season that will be tough for anyone to match in the years to come. Now it’s time for Cole to live up to his record-breaking contract, because patience doesn’t exist in New York.

The pressure in New York will be unlike anything Cole faced before and pitching in Yankee Stadium will hurt his numbers. He doesn’t need to repeat his gaudy stats from this past season, but consistent greatness is expected. If the Yankees don’t finish with the AL’s best record and if Cole doesn’t carry this rotation in October, Yankees fans will turn on him in a heartbeat.