Seven Devils find the net in rout of Blue Jackets 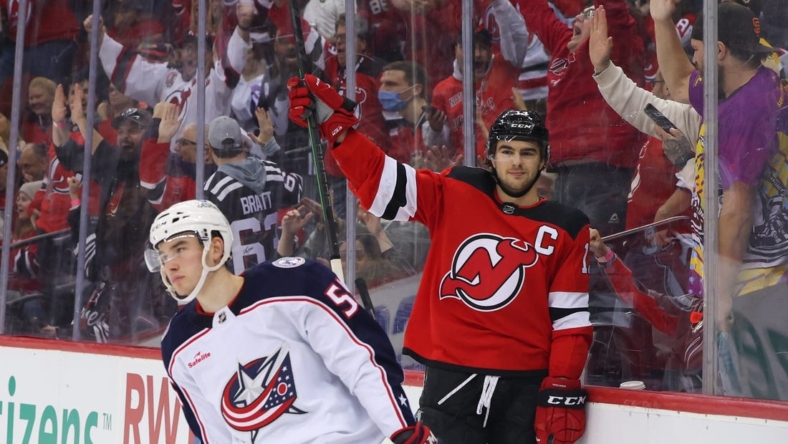 Seven different players scored a goal apiece Sunday afternoon for the host New Jersey Devils, who rolled to a 7-1 win over the Columbus Blue Jackets in Newark, N.J.

Fabian Zetterlund scored in the first period and Nico Hischier and Ryan Graves scored 33 seconds apart early in the second to jump-start the rout for the Devils, who have won three straight and six of seven.

John Marino scored in the final minute of the second period before Jonas Siegenthaler, Jesper Bratt and Miles Wood each added a goal in the third period for New Jersey, which earned its most lopsided win since beating the Montreal Canadiens 7-1 on Feb. 8.

Yegor Chinakhov scored in the second period for the Blue Jackets, who have lost three straight and four of five. Goalie Elvis Merzlikins recorded 46 saves.

The Devils took a lead they’d never relinquish when Zetterlund scored on his second shot of a possession with 2:50 left in the first. Hischier scored an impressive unassisted goal after collecting the rebound of a shot by Chinakhov and weaving from right to left through the neutral zone before firing a shot beyond Merzlikins’ glove 3:22 into the second.

Graves quickly made it 3-0 by taking a pass from Hughes, who was being harassed at center ice by Andrew Peeke, and scoring from the left slot.

A Devils turnover led to Chinakhov’s goal at the 6:39 mark. But New Jersey began pouring it on with 22 seconds left, when Marino picked off Peeke’s pass intended for Johnny Gaudreau deep in the Blue Jackets’ zone and scored from the right faceoff circle.

Siegenthaler began the third-period flurry for the Devils by pouncing on a loose puck in the crease at 3:46. Hughes finished an end-to-end run by passing across the ice to Bratt, who fired a sizzling slapshot past a sprawling Merzlikins with 7:13 left. Wood capped the scoring exactly two minutes later.