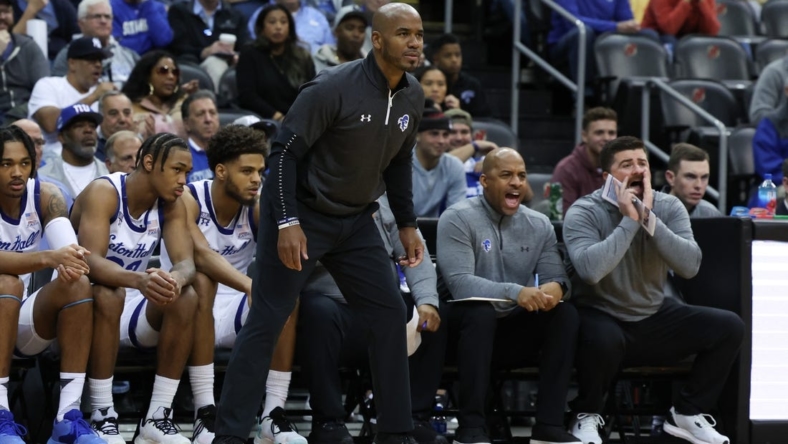 The Pirates (1-0) used a 15-0 run late in the first half to create plenty of separation from their New Jersey foes. Seton Hall shot 45.3 percent as a team while Monmouth (0-1) finished just 29.8 percent from the floor.

It marked Shaheen Holloway’s debut as head coach of his alma mater after guiding Saint Peter’s to the Elite Eight last March.

Monmouth forward Myles Foster led all players with 18 points (13 in the second half) and 15 rebounds. Both were career highs. Nine of his boards came from the offensive glass as he helped Monmouth outrebound Seton Hall in the first half, 26-19.

The Hawks lost 18 of their 23 total turnovers during the first half and shot 2 for 20 from 3-point range.

Tahron Allen drove for two layups to bring Monmouth within 20-15 with 7:49 left in the first half. Jackson responded by making a layup and foul shot, then converted a steal into a fast-break dunk — the first five points of Seton Hall’s 15-0 run. Saint Peter’s transfer KC Ndefo contributed a dunk during the extended stretch.

The Pirates led 36-17 at intermission. Monmouth shot just 5 of 29 from the floor before halftime and didn’t make a field goal for the final 7:49.

Foster led Monmouth out of halftime with an early layup to break the field goal drought, and a later bucket kept the Hawks within 46-27.

Seton Hall answered with a quick 10-0 run thanks to 3-pointers by Jamir Harris and Dawes and two layups from freshman Tae Davis. That gave Seton Hall a 29-point lead, and they would lead by as many as 30 in the final minutes.