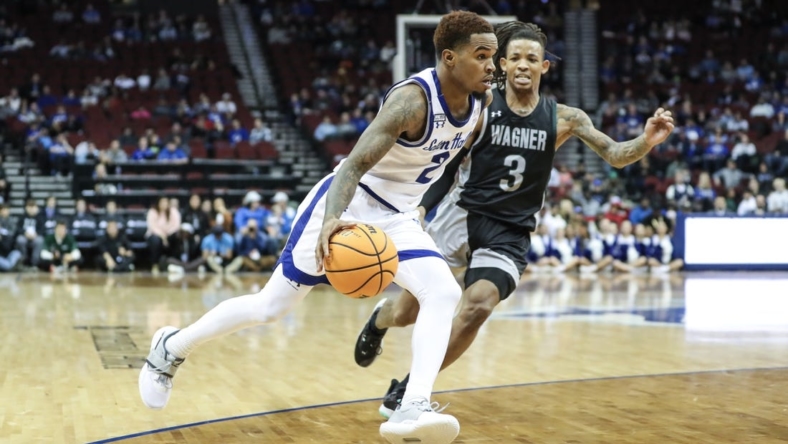 Al-Amir Dawes scored 19 points as host Seton Hall cruised to an 82-44 rout of Wagner on Sunday afternoon in Newark, N.J.

Dawes shot 2 of 13 in Seton Hall’s 16-point loss to Iowa on Wednesday but the Clemson transfer and Newark native rebounded nicely from his worst showing since transferring to Seton Hall.

The guard made 7 of 10 shots and finished three points shy of his career high set Feb. 22, 2020 against Boston College. He also made 5 of 7 shots, finishing one shy of his career best for 3-pointers to help Seton Hall make 11 of 23 3-point tries.

Reserve Tray Jackson added 14 of his 16 in the second half as Seton Hall (3-1) shot 55.6 percent after halftime and 51.9 percent overall while playing without Dre Davis due to a knee injury. KC Ndefo collected 12 points and five rebounds while Femi Odukale chipped in 11 and Tyrese Samuel contributed 10 and eight rebounds.

Rahmir Moore hit Wagner’s first basket that gave the Seahawks (3-2) its only lead and scored a team-high 15 points. Wagner shot 30.5 percent and lost its 13th straight game to Seton Hall along with its eighth straight against a current Big East opponent.

The game pitted a coaching matchup of former Seton Hall guards Shaheen Holloway and Donald Copeland. Holloway played at Seton Hall from 1996 to 2000 and Copeland followed from 2002 to 2006 with both players leading the school into the NCAA tournament as seniors.

Holloway took over at Seton Hall after leading St. Peter’s to the Elite Eight last spring and Copeland took the job at Wagner after Bashir Mason went to St. Peter’s

Dawes made two treys in 41 seconds to push Seton Hall’s lead to 47-27 a little over four minutes into the second half. He sank his fifth 3-pointer with 12 minutes left for a 57-32 lead and was on the bench when Seton Hall scored 16 straight to open a 66-34 lead with about 8 1/2 minutes left.