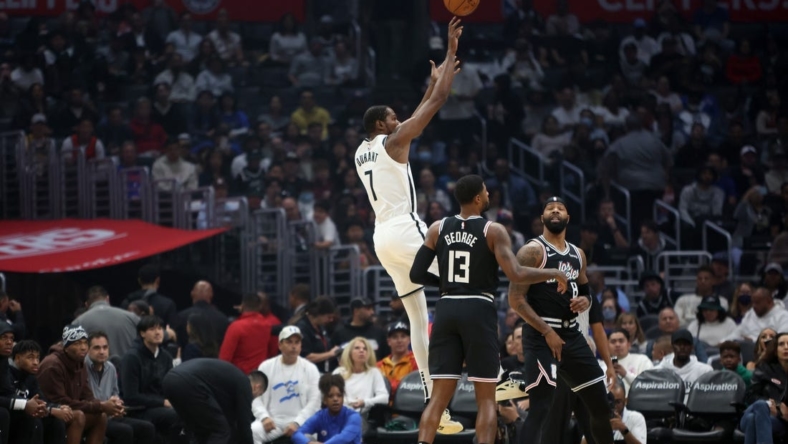 Seth Curry scored 14 points in the fourth quarter and hit the 3-pointer Saturday afternoon that gave the surging Brooklyn Nets the lead for good in a 110-95 win over the host Los Angeles Clippers.

Curry finished with 22 points off the bench for the Nets, who improved to 4-1 without Kyrie Irving. The guard was suspended by the team for at least five games on Nov. 3 after he Tweeted a link to an anti-Semitic film and then refused to apologize for doing so. Irving will not return to the team Sunday, when Brooklyn is scheduled to visit the Los Angeles Lakers.

Ivica Zubac (16 points, 15 rebounds) recorded a double-double for the Clippers, who had a two-game winning streak snapped. Paul George scored 17 points while Norman Powell (16 points) and John Wall (14 points) each got into double figures off the bench. Marcus Morris Sr. added 13 points.

There were four lead changes and two ties in the fourth quarter before Ben Simmons began the game-changing run for the Nets by hitting his lone basket, a floater that tied the game with 7:21 left. After a turnover by Wall, Curry drained a 26-foot 3-pointer to put the Nets up 89-86.

Wall responded with a jumper, but the Nets scored the next 15 points, a stretch in which the Clippers went 0-for-6 from the field with one turnover. Durant and Claxton had back-to-back baskets to extend the lead to 93-88 before Curry drained 3-pointers on consecutive possessions. Claxton hit a layup and O’Neale sank a 3-pointer to extend Brooklyn’s lead to 104-88 with 2:22 left. Los Angeles got no closer than 13 the rest of the way.