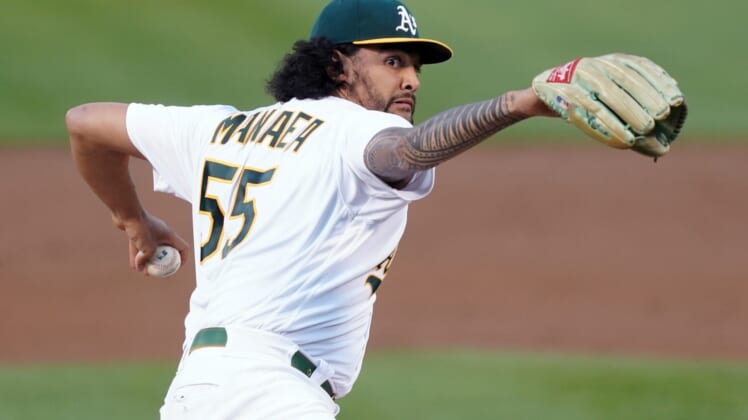 Seth Brown blasted a walk-off solo homer with two outs in the ninth inning and the Oakland Athletics opened a three-game series against the visiting Tampa Bay Rays with a 2-1 victory on Friday.

Oakland left-hander Sean Manaea took a no-hitter into the eighth inning but wound up with a no-decision.

Brown delivered an RBI single in the seventh before crushing a 1-1 pitch from left-hander Jeffrey Springs (2-1) deep into the right field seats for his first career walk-off homer.

Jake Diekman (2-0) recorded the final two outs in the top of the ninth for Oakland, which notched its fourth walk-off victory of the season and snapped Tampa Bay’s five-game winning streak.

Oakland broke the scoreless deadlock in the seventh after Jed Lowrie doubled with one out against Andrew Kittredge. Brown pinch-hit for Stephen Piscotty and drove in the go-ahead run with a single to right field.

Brown then moved to third when Elvis Andrus ended a 0-for-15 skid with a single to right. Andrus was thrown out attempting to steal second before Kittredge struck out Tony Kemp to end the inning.

Manaea then struck out Kevin Kiermaier before giving way to Yusmeiro Petit, who allowed a single to Willy Adames. Petit kept the game tied when pinch hitter Austin Meadows grounded into a fielder’s choice and Randy Arozarena filed out to end the inning.

Manaea had a perfect game going into the seventh inning before Arozarena drew a leadoff walk. The left-hander allowed one run on two hits and a walk with 10 strikeouts over 7 1/3 innings.

Lowrie had three hits for Oakland, while Matt Chapman went 0-for-3 with a walk, ending his nine-game hitting streak.

The Rays finished with three hits.