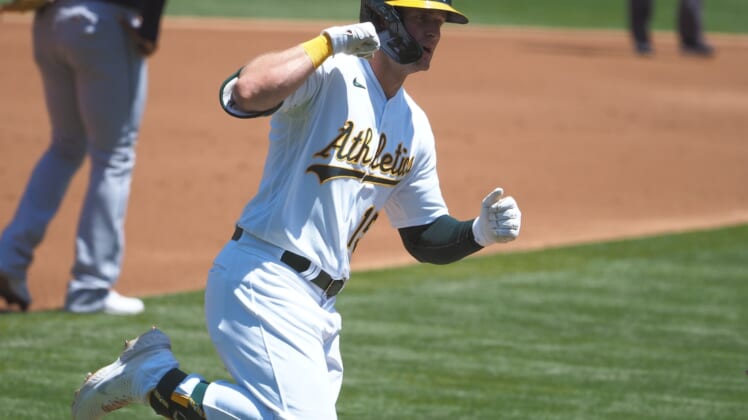 Seth Brown homered for the second straight game and drove in three runs as the Oakland Athletics beat the visiting Tampa Bay Rays 6-3 on Saturday.

Austin Allen added a solo homer for Oakland, which won for the fifth time in its last seven games. Frankie Montas (4-2) pitched into the sixth inning for the victory and Lou Trivino recorded the final four outs for his sixth save.

The Athletics received an early spark from Brown, who delivered a walk-off homer in Friday’s 2-1 series-opening win.

Glasnow, who had allowed four home runs through his first seven starts, trailed 3-0 after giving up Allen’s one-out blast to right field in the second inning.

The Tampa Bay ace struck out 11 over 5 2/3 innings and allowed just three runs on two hits, but saw his nine-game road winning streak come to an end.

The Rays pulled within a run in the sixth on Brandon Lowe’s two-run homer off Montas, who allowed two runs on five hits over 5 1/3 innings.

Oakland answered in the seventh on Brown’s two-out RBI single against Hunter Strickland.

The Rays came back to make it 4-3 with two outs in the eighth when Yandy Diaz scored from second on Mike Zunino’s single off Jake Diekman.

Oakland added two insurance runs in the eighth when Tony Kemp doubled with two outs against Strickland, who was then replaced by Ryan Thompson. Kemp scored when Sean Murphy reached on Mike Brousseau’s throwing error, and Elvis Andrus followed with an RBI double.

The Rays loaded the bases with no outs in the ninth, but Trivino retired the final three batters in order to end the game.

Tampa Bay has lost two in a row following a five-game winning streak. Center fielder Kevin Kiermaier exited in the second inning after a stolen base attempt and was diagnosed with a left wrist sprain.