Set at quarterback, No. 4 Michigan moves on to UConn 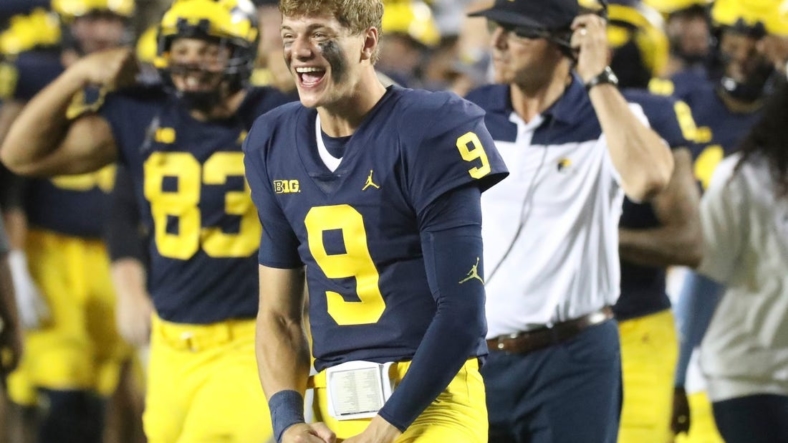 No. 4 Michigan dismantled overmatched opponents in its first two games, with another opportunity to continue the early trend against visiting UConn on Saturday.

Along the way, there still were decisions the Wolverines needed to make.

Michigan’s quarterback controversy was settled — at least for the time being — when coach Jim Harbaugh named J.J. McCarthy his starter after the Wolverines blasted Hawaii 56-10 on Saturday. Cade McNamara, last year’s starter and opening-game starter this season, has been relegated to backup duty.

“By merit he’s earned that,” Harbaugh said of McCarthy. “That’s by performance, by merit.”

McCarthy completed all but one of his 12 pass attempts against Hawaii for 229 yards and three touchdowns. He also has been a bigger running threat than McNamara with 66 yards and a touchdown in the season opener against Colorado State.

McNamara, who passed for 2,576 yards and 15 touchdowns last season, heard some boos when he replaced McCarthy during the Hawaii blowout.

Harbaugh tried to shrug it off.

“I do, the coaches do, our players do — they embrace the fact that we have two really good quarterbacks,” Harbaugh said. “You’d love for your fan base to be able to do that. I don’t expect you (the media) to do that, or if you do or don’t it’s irrelevant. The main thing is it’s a big edge for our team to have two really good quarterbacks, and we as a team embrace that. So outside of that, it would be irrelevant.”

Blake Corum has led the rushing attack, but the Wolverines have used a variety of ballcarriers. Four different players scored a rushing touchdown in the opener. That number increased to five against Hawaii. Corum has scored twice while averaging 7.5 yards per carry.

The Wolverines will wrap up their non-conference schedule on Saturday. Their chase to defend last season’s Big Ten championship will begin Sept. 24 against Maryland.

UConn dropped to 1-2 with a 48-14 home loss to Syracuse on Saturday. The Huskies’ defense was torched for 470 total yards and 29 first downs.

UConn already has been hit hard by injuries. Starting quarterback Ta’Quan Roberson is out for the season with a torn ACL. Running back Brian Brewton came away with a fractured shoulder against Syracuse. Wide receivers Cam Ross (broken foot) and Keelan Marion (broken collarbone) also are sidelined.

Freshman quarterback Zion Turner completed 14 of 17 passes Saturday but for just 92 yards, and 56 came on one pass.

“I’m not going to make excuses with injuries,” UConn coach Jim Mora Jr. said. “We have to find ways to get guys open. Guys have to get separation, and we have to help them create separation with the design of our plays.”

Mora likes the way his team has continued to play hard through adversity, using the effort shown on trying to block field goals and extra points as prime examples.

“I’ve seen teams that have a lot more talent and a lot less heart just give up in situations like that,” he said. “Our guys aren’t going to give up. Yeah, we have a tough stretch. We take it one play at a time. Win the next down — that’s got to be our mindset.”

The programs have faced each other just twice, with Michigan prevailing in 2010 and 2013.