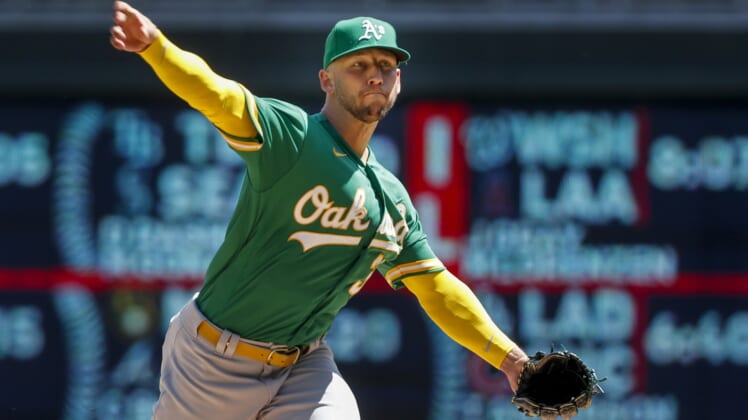 The visiting Oakland Athletics will look to collect their fourth victory in an unusual five-game series against the Detroit Tigers on Thursday.

Oakland came to Detroit saddled with a nine-game losing streak, but the A’s have turned things around against the floundering Tigers.

Detroit has lost eight of its past nine.

Kaprielian has lost both of his starts this season, most recently taking a tough-luck defeat on Saturday when he lacked run support. Kaprielian allowed just one run on three hits and struck out seven in 5 2/3 innings, but Oakland wound up losing 1-0 to the host Minnesota Twins.

After lasting just two innings in his season debut, Kaprielian threw 99 pitches against the Twins, including 40 sliders.

“The slider definitely played (Saturday),” he said. “You can tell I was probably a little lethargic at the back end of my outing and started leaving stuff arm-side and giving them too good of looks. But happy with it overall, and I will just continue to work on it and get better.”

Kaprielian had the start of his season delayed by a shoulder injury. He walked four batters against the Tampa Bay Rays in his season debut on May 1 but was much sharper the second time around.

“I made some adjustments throughout the week,” Kaprielian said. “Stuff started to play up because of it. I think it was just getting my feet under me a little bit and getting that comfort level back.”

In his lone career outing against Detroit, on Sept. 1, 2021, Kaprielian gave up four runs in four innings, including home runs to Miguel Cabrera and Akil Baddoo.

The long ball has been Brieske’s enemy. He has given up five in 15 innings, though opponents have scored just seven runs overall.

Detroit has struggled to score runs, the main reason it sits at the bottom of the American League standings. The Tigers are averaging a major-league-worst 2.74 runs per game and have hit a big-league-low 12 homers.

Oakland shut them out 9-0 on Wednesday

“We should be better and we will be better,” manager A.J. Hinch said of the offensive malaise.

Detroit rookie first baseman Spencer Torkelson, the top pick in the 2020 draft, has gotten off to a very rough start. He is batting .149. However, the Tigers aren’t ready to send him to the minors for more seasoning.

“Right now, we still feel he’s been competitive,” Hinch said. “He’s helping us with his defense, his attitude has been good, his reactions have been good. … It’s still really early, even though it doesn’t feel like it.”

“There’s nothing like struggling in the big leagues,” Hinch said. “At the moment, it feels like the worst time of your life. … We’ve got to find that right fine line between pushing him but not accepting the lack of performance.”