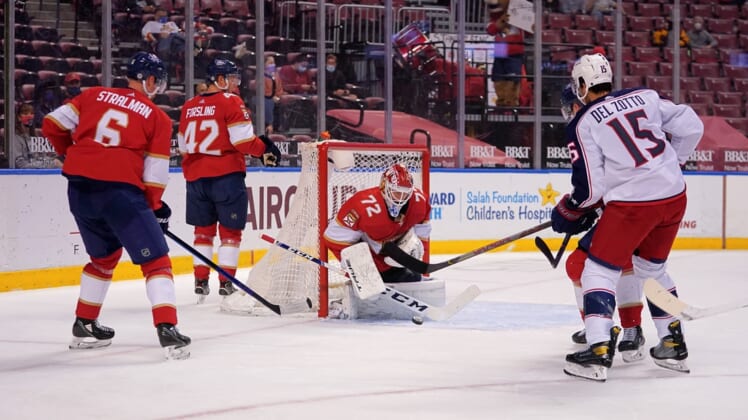 Sergei Bobrovsky got his fifth win of the season against his former club, making 34 saves as the Florida Panthers defeated the Columbus Blue Jackets 4-2 on Monday in Sunrise, Fla.

Frank Vatrano scored twice and Sam Bennett and Radko Gudas each had a goal for the Panthers, who improved to 6-0-1 against the Blue Jackets this season. The final game of the season series is scheduled for Tuesday night in Sunrise.

Anthony Duclair had two assists for the Panthers.

The Panthers were outshot 12-5 early on but took a 1-0 lead at 11:40 of the first period when Vatrano scored his 16th goal of the season. The tally was unassisted as a puck inadvertently ricocheted off the skate of Columbus defenseman Seth Jones and right into Vatrano’s path.

Vatrano later scored into an empty net with 1:22 remaining, his 17th goal of the season.

Florida pushed the lead to 2-0 when Sam Bennett scored 59 seconds into the second period.

The Blue Jackets halved the deficit when Bjorkstrand scored at 13:22 of the middle period.

Columbus got back within a goal at 8:01 of the third when Dalpe scored.

Bobrovsky improved to 6-1-1 against the Blue Jackets since leaving Columbus for Florida in July 2019.

Bennett, playing in his second game with the Panthers since being acquired in a deadline deal with the Calgary Flames, was assessed a 10-minute game misconduct for instigating a fight with Columbus defenseman Gavin Bayreuther at 12:27 of the second period.

Bayreuther, playing in his first NHL game since Dec. 27, 2018, with the Dallas Stars, had hit Duclair, and Bennett took exception.