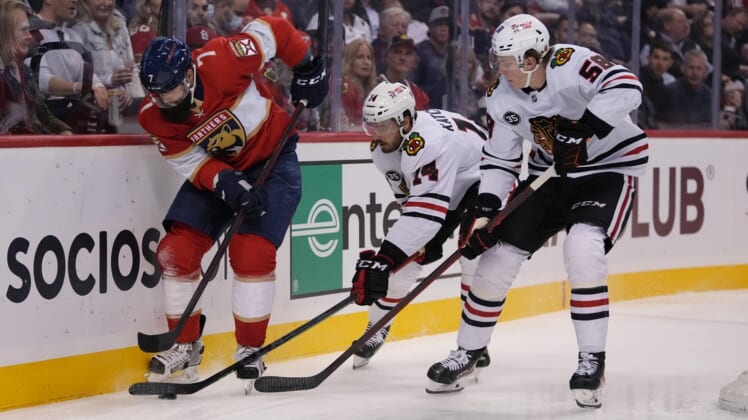 Jonathan Huberdeau set an NHL record, Aleksander Barkov scored twice, and Sergei Bobrovsky posted 37 saves for his third shutout of the season as the Florida Panthers defeated the Chicago Blackhawks 4-0 on Thursday in Sunrise, Fla.

Huberdeau dished his 71st assist, the most in NHL history by a left winger. The previous record was 70, set by the Boston Bruins’ Joe Juneau in 1992-93.

Gustav Forsling had a goal and an assist, Ryan Lomberg also scored and Sam Reinhart notched two assists for the Atlantic Division-leading Panthers. Florida won for the fifth time in six games to post its 46th victory, one short of the franchise record set in 2015-16.

Collin Delia made 40 saves for the Blackhawks, who have lost three consecutive games (0-2-1).

Barkov, who had a goal disallowed in the first minute of the game, gave Florida a 1-0 lead with 18:24 expired. Barkov held onto the puck as ex-Panthers forward Henrik Borgstrom tried in vain to chase him down. Barkov finally used his backhand to stuff the puck in from the doorstep.

The Panthers extended their lead to 2-0 on Lomberg’s goal with 7:23 gone in the second. The sequence started when Bobrovsky stopped Dylan Strome’s shot and point-blank rebound. Lomberg scored 33 seconds later as he made a move off the rush and fired in his goal off Delia’s glove.

Florida’s third goal, at 11:46 of the second, came on a long rebound to Forsling in the high slot. The low shot went under the stick of Delia, who had little visibility as Florida’s Sam Bennett and Chicago’s Caleb Jones crashed to the ice right in front of the goal.

The goal withstood a video review after Chicago challenged, seeking an interference call.

Florida, on a five-on-three power play, made it 4-0 on Barkov’s second goal of the night, which came with 6:13 left in the contest.