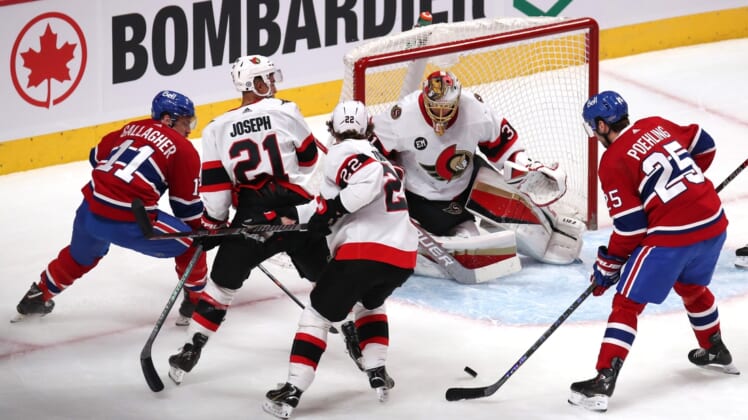 Drake Batherson had a goal with an assist in the third period, when the visiting Ottawa Senators broke open a tie game with three unanswered goals to match a season high with their third straight victory, 6-3 over the Montreal Canadiens on Tuesday night.

Tied 3-3 and with Ottawa (26-37-6, 58 points) on the power play, Josh Norris threw the puck at the net, where Batherson got enough of his stick to push the puck by Montreal netminder Jake Allen (26 saves) just 29 seconds into the third.

With 8:30 remaining in regulation and during a delayed penalty, Batherson earned an assist on Colin White’s laser from the slot.

Austin Watson’s empty-netter — and second goal of the night — came after the Canadiens questionably pulled Allen with 4:04 left in the contest, securing the result.

Brady Tkachuk recorded a goal with two assists and Tim Stutzle scored his 15th for the Senators, who beat Montreal (19-40-11, 49 points) for the first time in three tries this season.

Back from missing eight games with a lower-body injury, Brendan Gallagher had a goal with an assist, Justin Barron recorded his first NHL goal and Cole Caufield registered his 16th for Montreal, which has lost four of five amid a 4-6-4 rut.

Montreal scored just 2:31 into the game. Off an Ottawa turnover in its own zone, Gallagher converted a juicy rebound in traffic for his first goal in exactly a month.

The Senators, however, leveled the contest with 4:40 left in the opening period after Montreal’s Corey Schueneman inexplicably threw the puck toward the slot, where it landed on Watson’s stick for a successful one-timer.

Ottawa went ahead 2-1 via Stutzle’s backhander on the power play at the 7:18 mark of the second. But the Canadiens tied it just 31 seconds later when Barron blew a wrister by Ottawa goalie Anton Forsberg (27 saves) for his milestone goal.

Ottawa again took the lead through some tic-tac-toe passing between Michael Del Zotto, Mathieu Joseph and Tkachuk, who concluded on a tip-in with 5:40 to go in the middle frame. The Canadiens again answered, through Caufield with 3:35 remaining in the second.