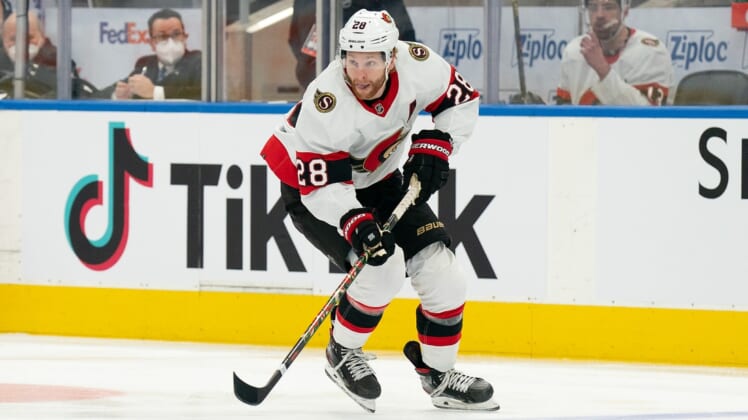 The Ottawa Senators face a packed schedule as they begin the second half of the NHL season, starting with Monday’s home game against the New Jersey Devils.

Thanks to several COVID-related postponements earlier in the season, the Senators will return from the All-Star break to play 10 games in a 16-day stretch (Feb. 7-22). Though eight of the games are on home ice, it represents a grueling test for a young team that has had trouble staying healthy this season.

“Please, just no more injuries. Just give us a healthy team or 15 or 20 games to see what we can do,” Senators general manager Pierre Dorion told The Ottawa Sun. “On the ice, we want to see the continued growth of our young players. We’ve got a lot of hockey … we’ve got to make sure that we compete every day.”

The Senators will get some reinforcement in the form of Connor Brown, who will return after missing 10 games with a broken jaw. Nikita Zaitsev (heel) and Dylan Gambrell (upper body) could return to Ottawa’s lineup soon.

The Senators come right back Tuesday to face the Carolina Hurricanes, one of three times Ottawa plays on back-to-back nights in catching up to the rest of the league in games played (their 40 games are as many as eight fewer than other teams). Comparatively, New Jersey plays just five times Feb. 7-22.

Matt Murray and Anton Forsberg figure to split starting duties in goal for the Senators in the coming weeks. Murray has been the better of the two goalies recently, posting a 4-0-2 record with a .939 save percentage over his last six games.

Building for the future will be the theme of the second half for both the Devils and Senators, who sit ahead of only the Montreal Canadiens in the Eastern Conference standings.

The Devils are looking to snap an 0-6-0 streak. Just before the All-Star break, they were pinned with a 7-1 defeat by the Toronto Maple Leafs, marking their largest margin of defeat all season.

Jack Hughes will be unavailable for the Devils after being placed on the COVID-19 protocol list. Hughes has 27 points (12 goals, 15 assists) in 28 games this season and just represented the Devils during NHL All-Star Weekend.

“A lot of friends and family were texting me and just telling me how excited they were that I was here,” Hughes said after recording three goals and an assist in the Metropolitan Division’s two All-Star Game victories. “So at the end of the day, it was nice that I scored and stuff, but (it was) just a special weekend.”

Still, New Jersey is 1-9-0 and has been outscored 41-24 over the past 10 games. Goaltending has been a problem all season, as the Devils have the second worst (.885) save percentage and have allowed the third most (163) goals in the NHL.

Mackenzie Blackwood has missed seven games with a heel injury and his return date is still unknown, so the Devils will start either Jon Gillies or rookie Nico Daws on Monday. Daws was called up from the American Hockey League on Friday.

Dougie Hamilton has missed the Devils’ last 12 games due to a broken jaw. The defenseman has been skating in non-contact drills and could be ready to play as early as Monday.

New Jersey coach Lindy Ruff will return to the team’s bench after missing the last two games due to the death of his father.

In the teams’ first meeting of the season on Dec. 6, the Senators recorded a 3-2 shootout win over the Devils in Newark, N.J.