Senators score 4 goals in 3rd period to take down Jets 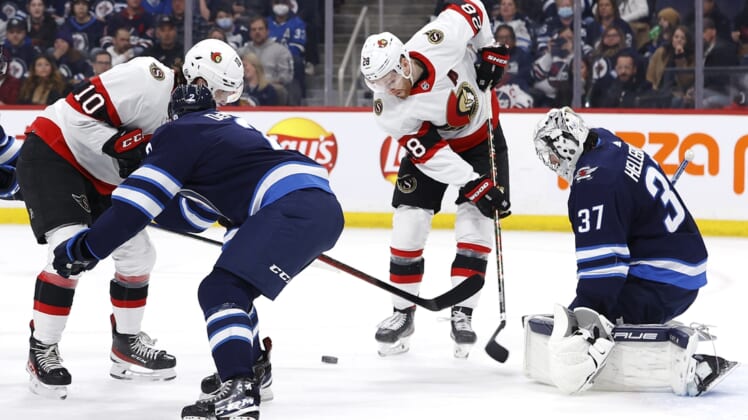 Tyler Ennis, Colin White and Connor Brown scored in a 3:15 span late in the third period to lift the visiting Ottawa Senators to a 5-2 win against the Winnipeg Jets on Thursday night.

Brady Tkachuk scored two goals, Tim Stutzle and Michael Del Zotto had two assists each, and Anton Forsberg made 22 saves for Ottawa, which had lost five of its previous six games.

Josh Morrissey and Kyle Connor scored, and Connor Hellebuyck made 28 saves for the Jets, who had won four of five.

The Senators then drew the first penalty of the game 51 seconds later and White scored from in close to make it 3-1 with 5:19 left.

Brown scored with 4:20 remaining to stretch the lead to 4-1.

The Jets pulled Hellebuyck for the extra attacker and Connor scored to make it 4-2 with 2:54 left, but Tkachuk came back with an empty-net goal to make it 5-2 with 1:26 remaining.

Forsberg, who had combined to allow three goals in his previous two starts, made a save on Dylan DeMelo coming through the right circle and punched the puck into the wall.

Blake Wheeler maintained possession and he and Morrissey traded passes before Morrissey brought the puck through the left circle and tried to center a pass to Wheeler near the far post.

Ottawa defenseman Nick Holden stuck out his stick and the puck went off his blade and into his own net. It was the 10th goal of the season for Morrissey, adding to his career high.

White won a faceoff in the offensive zone and the puck went back to Artem Zub at the right point. He sent a slap shot toward the net and Tkachuk tipped the puck past Hellebuyck.