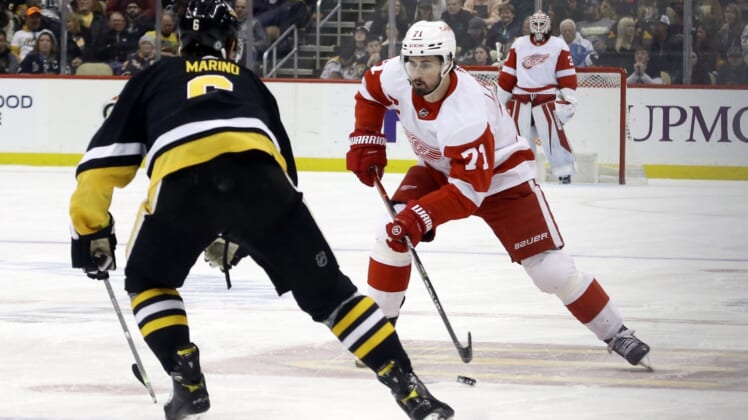 The Ottawa Senators and Detroit Red Wings will begin a stretch of three meetings in 12 days when they face off on Friday night in Detroit.

It’s the first of back-to-back games between the two Atlantic Division rivals who have yet to play each other this season. The two teams also play on Sunday in Ottawa and again on April 12 in the Motor City.

Both teams will be glad to turn the page on the calendar following poor March performances.

Ottawa, which has lost its last two games, went 4-10-1 in March. The Red Wings, who have dropped four in a row, were even worse, going an NHL-worst 3-8-3 during the month.

Perhaps even more troubling for Jeff Blashill’s squad was the way they lost. The Red Wings, who were still in the hunt for a possible playoff berth heading into the All-Star break, allowed six or more goals five times in March. The losses included a head-scratching 9-2 home loss to the Western Conference’s worst team, Arizona, and an 11-2 beatdown at Pittsburgh on Sunday.

“It’s not acceptable,” captain Dylan Larkin, who has scored 28 goals, said afterward. “We just can’t show up like that.”

The Red Wings played better but still lost in their next game on Wednesday, a 5-4 overtime loss at home to the red-hot New York Rangers. Garnering a point in that contest was bittersweet because Detroit blew leads of 2-1, 3-2 and 4-3, yielding a power-play goal to Chris Kreider with 3:38 left in regulation that tied it 4-4.

“At the end of the day, we have the lead late,” Blashill said. “We’ve got to find a way to kill a penalty.”

Andrew Copp won it for the Rangers 1:34 into overtime.

“We gave up four (goals) in regulation, so that’s not perfect,” Blashill said. “But I thought we were better in a lot of ways defensively. Way better. Sunday is Sunday. That obviously was no good but I thought we were way better in a lot of ways. It’s unfortunate we lost an assignment on the winning goal. You want to find a way to win that game. You feel better about yourself.”

“There are positives to take out of this,” added Larkin. “Our work ethic, our compete, the things that we’ve talked about all year. We had those. But it doesn’t feel good to come up short again.”

Ottawa comes in off a 4-1 loss at Nashville on Tuesday as Juuse Saros turned away 36 of 37 shots. Brady Tkachuk scored his career-best 23rd goal of the season on the power play to give the Senators a quick 1-0 lead. But Ottawa finished just 1-for-6 on the power play and Connor Brown was also stopped by Saros on a penalty shot.

“I think (Saros) took some of our confidence away with the saves he made,” Ottawa coach D.J. Smith said.