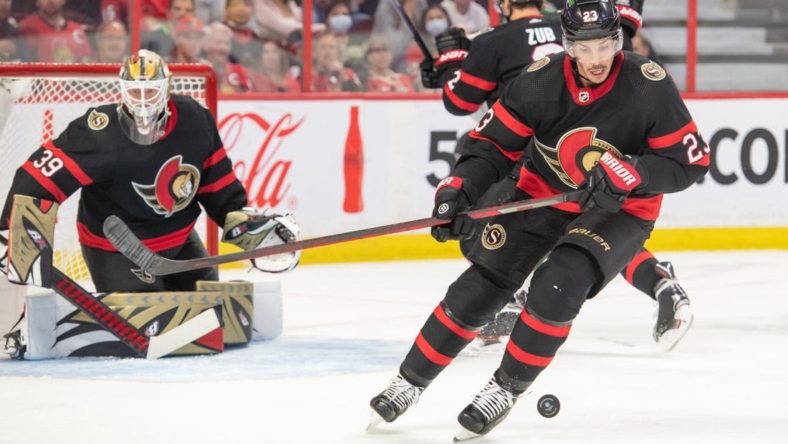 The red-hot Ottawa Senators will look to complete a perfect homestand when they host the Minnesota Wild on Thursday.

After losing their first two games (both on the road) of the season, Ottawa is unbeaten on home ice. The Senators are 4-0-0 heading into the final contest of their five-game homestand and have outscored opponents 22-11 during their four-game streak.

Monday’s game with the Dallas Stars was tied 1-1 after two periods, but Ottawa then scored the game’s next three goals to pull away for the 4-2 win.

“We understand how hard we have to work to get to the third period in a game, and not be down every time. I thought we worked really hard in the second (period) to set that up,” Senators head coach D.J. Smith said.

While those names are regulars on the scoresheet, rookie forward Shane Pinto has made a more unexpected impact. Pinto has scored in each of his last five games, setting a Senators team record for longest goal streak by a rookie.

Anton Forsberg missed Monday’s game due to an undisclosed injury, but Smith said Forsberg could be back as early as Thursday’s game. If Forsberg isn’t yet ready, backup goalie Magnus Hellberg will make his second consecutive start.

Senators forward Josh Norris will be sidelined long-term and could miss the remainder of the season with a left shoulder injury, Smith announced Wednesday.

Like the Senators, the Wild have also gained momentum after a slow start. Minnesota went 0-3-0 in its first three games, but then collected points in each of its last three (2-0-1) outings.

Wild head coach Dean Evason felt his team “misplaced” its usual style of play early in the season, but he thought Tuesday’s 3-1 road win over the Montreal Canadiens was a return to form.

“We talked to the guys about embracing the way that we played (against Montreal). That’s how we have to play — a gritty, determined game against a real good offensive hockey club that put a lot of pressure on us,” Evason said. “And we did a lot of good things in the areas that we haven’t done good things, as far as defending and managing the puck very well.”

Joel Eriksson Ek bookended the scoring Tuesday, recording the Wild’s first goal and then an empty-netter to seal the victory. It was the seventh multi-goal game of Eriksson Ek’s seven NHL seasons, and he now has four goals in six games this season.

The Wild were 0-for-3 on the power play Tuesday, marking the first time this season they were held without at least one power-play goal. Minnesota is still among the league leaders in power-play percentage (8-for-25, 32 percent).

Marc-Andre Fleury will likely be back in net after stopping 26 of 27 Canadiens shots on Tuesday. The veteran goalie was in need of a strong performance after posting a 5.25 goals-against average in his first four games.