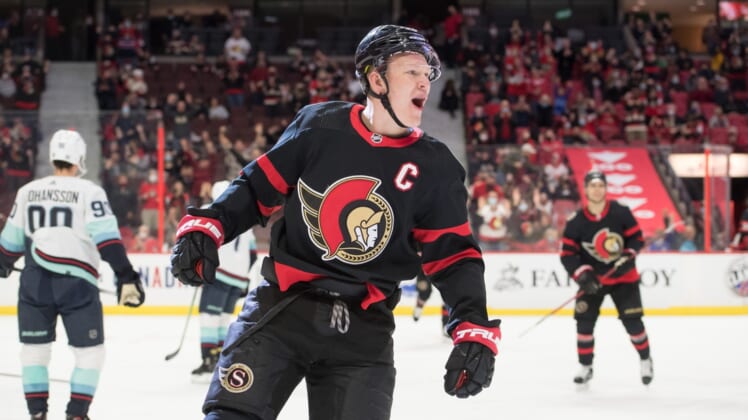 After squandering a three-goal, third-period lead to the visiting Seattle Kraken on Thursday, the Ottawa Senators hardly squirmed in rallying for an overtime victory.

“We played a really good game for probably 40, 45 minutes and then it started to go sideways,” said Ottawa’s Josh Norris, whose two goals included the OT winner. “But it is what it is. You get yourself in that hole and you’ve got to dig yourself out.”

The Senators will look to surge ahead and stay there on Saturday when they host the Chicago Blackhawks in the second of a five-game homestand.

Thursday’s 4-3 win helped smooth a run of six losses in seven games at Canadian Tire Centre, where Ottawa seeks to claim consecutive victories for the first time since winning three home games in a row from Jan. 31 to Feb. 8.

In addition to Norris’ heroics and goaltender Anton Forsberg’s 30 saves, Brady Tkachuk lifted the Senators with a goal and assist. Playing in his 100th game, Norris reached 39 career goals to match Alexei Yashin’s franchise record for the most goals in that span.

Chicago has lost three of four and seven of 10 after falling 4-3 at Boston on Thursday.

“I thought we played pretty well the whole game. Played for each other,” Chicago’s Alex DeBrincat said. “It just didn’t work out in the end. Their power play was good and we kind of blew a couple chances on the power play.”

Boston scored twice on the man-advantage, while Chicago went 1-for-3. Brandon Hagel netted his second goal of the night with the Blackhawks on the power play, tying the game at 3-3 at 3:24 of the third period.

In his third season, Hagel reached the 20-goal plateau for the first time in his career.

“It definitely would have felt way better if we won that one, for sure,” he said. “It’s obviously nice to get to 20, but I’ll hopefully go for 30.”

DeBrincat had a goal and an assist to stretch his goal streak to five games. Patrick Kane added an assist, giving him 12 points in five games to open March. Kane registered six points — on a goal and five assists — in Tuesday’s 8-3 rout of visiting Anaheim.

Hosting Ottawa on Nov. 1, Chicago rolled to a 5-1 victory to log its first win of the season after earning just two points over the first nine games.

In that game, Kane collected three goals and an assist, Hagel scored twice and Marc-Andre Fleury made 29 saves. Chicago rolled to a 4-0 lead before Alex Formenton netted the lone goal for Ottawa.