Senators hope for a jolt of road luck vs. Lightning 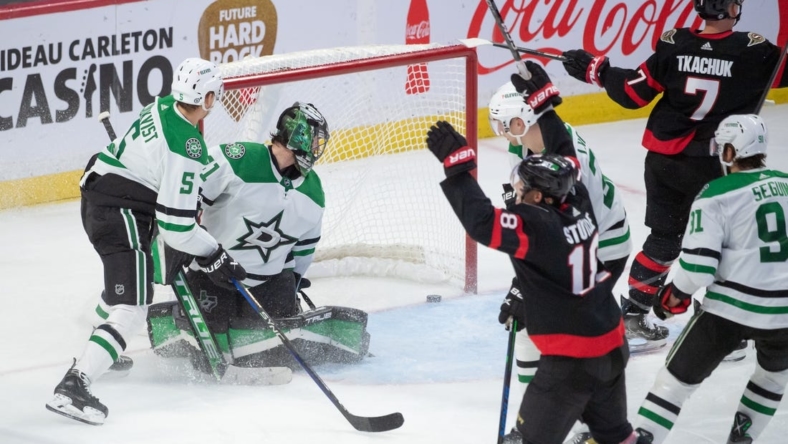 After his club’s 5-3 loss in Florida on Saturday, Ottawa coach D.J. Smith hopes the worst is behind the Senators.

After watching eight October games that Ottawa managed to split, Smith said the first 20 minutes against the Panthers wasn’t indicative of his side’s abilities.

“The first period is, well, it’s our worst period of the year for sure,” Smith said. “Just weren’t ready when the game started. We battled back and we gave up a goal at the end of the second period, and then we give up a goal with three minutes to go. I mean, we kept battling but we’ve got to be better than that.”

Following that defeat, Ottawa heads up the Gulf Coast to play the Tampa Bay Lightning on Tuesday in the first of three matchups on the season. The Senators are seeking their first road win of the season after three losses.

With the additions of Claude Giroux and Alex DeBrincat, the Senators are aiming to become a contender in the Atlantic Division, which is off to a strong start. None of the eight teams has a losing record, leaving Ottawa and its eight points in last place.

Against the Panthers, Ottawa found itself chasing the puck most of the time. Florida put up a team-record 58 shots against Senators goalie Anton Forsberg.

Smith shuffled his team’s lines in Sunday’s practice at Florida’s rink. He moved Shane Pinto up into the top six to center the trio featuring DeBrincat and Giroux. Pinto replaces veteran Derick Brassard, who may be scratched in Tampa.

Pinto, 21, is excited to be the pivot between Giroux and DeBrincat.

“These two are unbelievable players,” Pinto said. “I’ve just got to put my work boots on, move my feet and do the best I can. But I’m not going to change my game. I’m just going to continue to do what I do. Hopefully, we get some chemistry and get things going.”

The match with the Lightning will conclude Ottawa’s brief two-game road trip. They return home to play three against the Vegas Golden Knights, Philadelphia Flyers and Vancouver Canucks beginning Thursday.

In their first game back from a three-game California road trip, the Lightning will look to extend their run of winning play against Ottawa.

But coach Jon Cooper also altered his lines, too, opting to put Alex Killorn with Steven Stamkos and Nicholas Paul. That resulted in Killorn notching his second goal to put the visitors up 3-2 in San Jose in the eventual 4-3 win over the Sharks on Saturday.

In his 11th season with Tampa Bay, Killorn is thrilled to be on his new line that features some new and old.

“It’s been good. I’ve played a ton with Stammer, but I haven’t played too much with Paulie. But he’s really good at protecting pucks and works really hard,” Killorn said. “We want to be good in the offensive zone. And I think we can be better. You want to be hard to play against.”

Tampa Bay is opening a four-game homestand that also has games against the Carolina Hurricanes, Buffalo Sabres and Edmonton Oilers.