Senators come from behind to beat Bruins 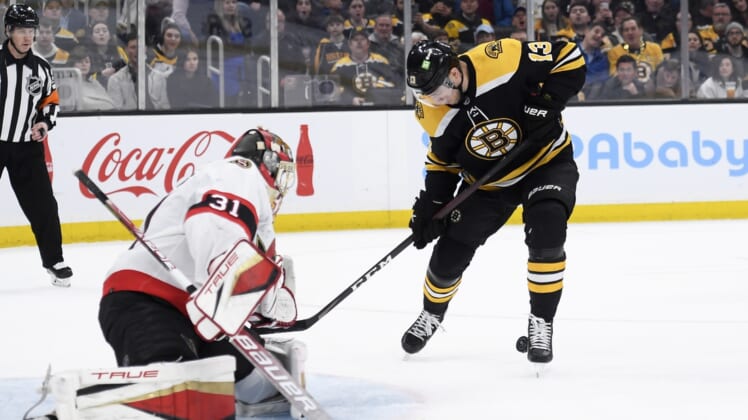 Tim Stutzle recorded a goal and two assists — all in the second period — to help the Ottawa Senators earn a 3-2 win over the host Boston Bruins on Thursday night.

Brady Tkachuk scored a goal and assisted on Josh Norris’ team-leading 33rd tally of the season for Ottawa (28-40-6, 62 points). The Senators overcame a 2-0 deficit to win their second game in a row.

On a five-on-three power play, Norris teed up a tying goal from the top of the right circle at 9:30 into the middle frame. The Senators took their first lead just 57 seconds later as Stutzle slotted home a loose puck at the top of the crease for a power-play goal.

Anton Forsberg made 40 saves for the Senators, including 18 in the third period.

After making eight first-period saves, Bruins goalie Linus Ullmark didn’t return to the bench due to an apparent injury. Ullmark talked to a trainer on the bench after taking a high shot early in the first period, but his status wasn’t updated by the end of the game.

Jeremy Swayman relieved Ullmark and made 21 saves, two of them on Connor Brown breakaways in the third period.

Rookies Marc McLaughlin and Jesper Froden scored in the first period for Boston (45-24-5, 95 points), which has lost three straight in regulation. Froden’s goal was the first of his NHL career.

Boston was 0-for-5 on the power play.

Ullmark was busy making four saves in the first five minutes, but the Bruins rewarded their goaltender by scoring the game’s first goal at the 6:36 mark. McLaughlin got credit for his third goal in as many games at TD Garden, redirecting Nick Foligno’s shot from the low left circle.

Froden doubled the Boston lead with 59 seconds left in the opening period, tipping home Matt Grzelcyk’s point shot. The goal came just after Ullmark made a flashy glove save on Artem Zub that would have tied the score.

Ottawa cut its deficit in half 47 seconds into the second. Tkachuk buried a bad-angle rebound on just the second shot that Swayman faced, marking his 27th goal and team-leading 57th point.