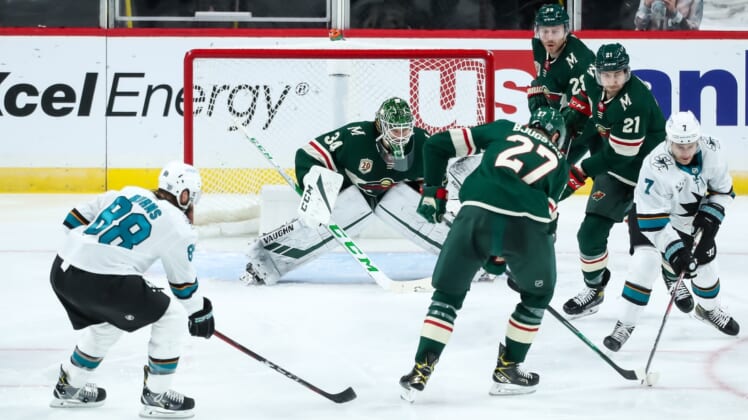 After a home-opening victory over San Jose that was much tougher than the score suggests, the Minnesota Wild return to home ice Sunday night in St. Paul, Minn., with the Sharks looking to find an elusive offense.

The Wild captured Friday night’s game, 4-1, yet, the outcome was very much in doubt until the Wild scored a pair of empty netters in the final 75 seconds. What’s more, Minnesota’s starting netminder Cam Talbot left the game with a non-contact injury.

Talbot’s availability is uncertain for Sunday, although Wild coach Dean Evason said after the game “all indications are it’s not serious,” and he has Kaapo Kahkonen ready after the 24-year-old Finn made 17 saves on 17 shots in relief, playing the entire second and third periods.

After making 11 saves on 12 shots in the first period, Talbot took the ice for the second period but during warmups realized he was unable to continue, and Kahkonen came off the bench.

“It’s not easy,” Kahkonen said of having to jump into action to kick off the second period. “But you just have to be ready for anything when you’re a backup goalie in a game.”

Martin Jones will be back in net for the Sharks on Sunday after Devan Dubnyk got the start on Friday. Dubnyk gave up two goals in his first game against the Wild since being traded from Minnesota this past offseason and admitted he felt anxious going up against his old team.

“I was a little fired up and overthinking stuff,” Dubnyk said. “I just wanted to give the guys a good chance.”

In Jones’ previous outing, he made 22 saves as the Sharks topped the St. Louis Blues 2-1 in a shootout finish. He enters Sunday’s matchup with a 2-1-0 record, 3.08 goals-against average and .893 save percentage on the season.

Sharks’ coach Bob Boughner could make even more changes to his lineup ahead of Sunday’s game after San Jose struggled to generate offense on Friday. The Sharks’ lone goal came in the first period courtesy of fourth-line winger Matt Nieto, and Boughner said he is looking for more contributions from his top-line players.

“We need more from the big guys,” Boughner said. “I thought we played well enough to win, but we need more offense obviously than just one goal. It’s tough to win that game.”

San Jose is also looking to get more out of its power play, which was stellar at the start of the season but is now 0-for-its-last-10 attempts, including three chances with the man advantage against Minnesota in Friday’s game.

“I think the difference is our power play at crucial times needs to get us one there,” Boughner continued. “Minnesota’s a pretty good penalty kill team, but we didn’t generate a lot of emotion from our power play. Especially when we had chances, we didn’t capitalize on our chances.”