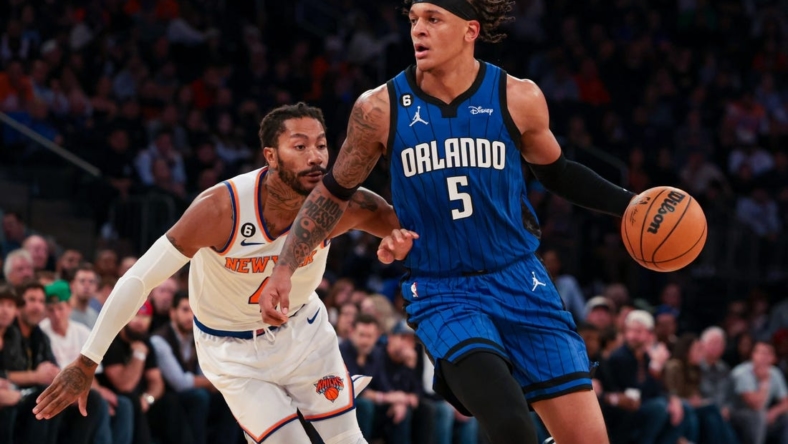 Rookie Paolo Banchero is off to a sizzling start to the season. His team, on the other hand, isn’t so hot.

Banchero and the Orlando Magic continue their quest for their first victory of the campaign on Friday night when they host the Charlotte Hornets.

Banchero finished with 29 points on Wednesday to become the third No. 1 overall pick in NBA history to score at least 20 points in his first five games. Hall of Famers Elvin Hayes (10 games, 1968-69) and Oscar Robertson (six games, 1960-61) are the others.

Banchero added eight rebounds, four assists, two blocks and a steal in what ended up being the Magic’s fifth loss in as many games.

“I think I’m playing well, but it’s not translating to wins, so I’m not satisfied,” the 19-year-old said.

While it doesn’t count in the standings, Banchero’s play has won over Orlando coach Jamahl Mosley.

“Paolo is selfless, tough, confident, high basketball IQ, willing learner — all of those things,” Mosley said. “He also has such a great gift of humility and I think that’s huge. He’s just blended in like he belongs here.”

Franz Wagner added a season-high 22 points on Wednesday and 7-foot-2 Bol Bol collected nine points and a career-best 10 rebounds for the Magic.

Orlando isn’t helping itself from 3-point range, however. The club made just 6 of 24 attempts from beyond the arc on Wednesday and is shooting just 29.9 percent from long distance on the season.

The Magic return home to see a familiar face on Friday in Steve Clifford, who is in his second stint as coach of the Hornets. Clifford, 61, spent five seasons as an assistant in Orlando under Stan Van Gundy in 2007-12 and then served as the team’s coach from 2018-21.

Clifford saw his current charges fail to preserve a lead late in the fourth quarter of Charlotte’s 134-131 overtime loss to the New York Knicks on Wednesday.

“We should be disappointed,” Clifford said after the Hornets’ first loss in three road games. “We were up five with like 2:20 left. We made two mistakes in big possessions and that’s where you have to be at your best. We’re certainly disappointed. It’s early in the year and no matter what, you have to learn from things.”

“It’s a close game — you never want to lose those,” Smith said. “But at the end of the day, you learn from it. That’s how I look at it. There’s nothing we can do now about it except watch the tape and get better.”