Seeking 10th win in a row, Donovan Mitchell and the Utah Jazz visit the Mavs in Dallas 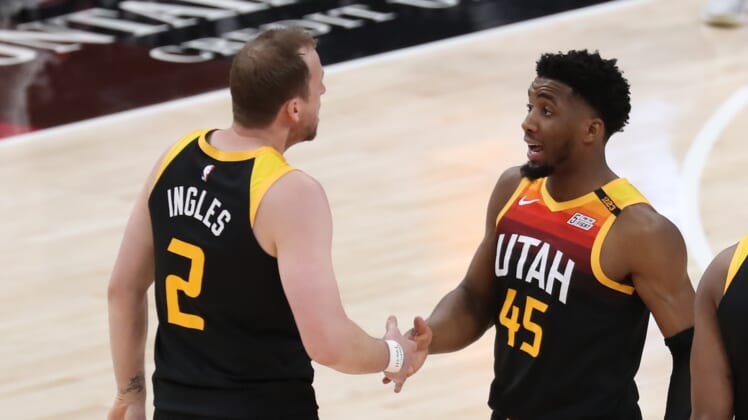 The Utah Jazz are playing stellar basketball lately and are coming off one of their finest offensive performances of the season as they head into Monday’s game in Dallas against the Mavericks.

Utah made 26 3-pointers and shot a season-best 55.4 percent from the field Saturday on its way to a 137-91 victory over Orlando. The Jazz made an NBA record 18 3-pointers before halftime and emptied their bench by the start of the fourth quarter.

“This is one of those nights for us where we played really well, and we played the right way,” Jazz coach Quin Snyder said. “We played a team that is going through a transition. That said, we were happy with the way we played and continue to emphasize our identity as a team.”

Donovan Mitchell has keyed Utah’s surge since the all-star break. Against Orlando, he made 6-of-7 3-pointers in the first half to help the Jazz build a 78-40 halftime lead. He is averaging 28.3 points in the 12 games he’s played since the all-star break and has shot 50 percent or better from the field seven times in that stretch.

It isn’t just scoring where Mitchell is making his impact felt. He also averaged 6.1 assists in March.

“My job is to go out there and put the ball in the basket, but it’s the other things — being a leader, being that guy with the ball in his hands to be able to make smart decisions throughout the entire game,” Mitchell said. “I would say that this has probably been my best stretch.”

Dallas (27-21) is enjoying its own surge behind the all-around play of Luka Doncic. The Mavericks have won four straight to climb into seventh place in the Western Conference standings behind the league-leading Jazz.

Doncic is averaging 28.3 points on 54.4 percent shooting during the four-game winning streak, and has averaged 6.8 rebounds and 6.3 assists.

Doncic has tallied at least 20 points, five rebounds, and five assists in a league-best 34 games this season. This included pouring out 26 points, eight rebounds and six assists in a 109-87 victory over Washington on Saturday. The Mavericks played the Wizards without three of their regular starters: Josh Richardson (left calf tightness), Kristaps Porzingis (right knee injury recovery), and Maxi Kleber (left leg contusion).

Dallas held the Wizards to 40 points after halftime.