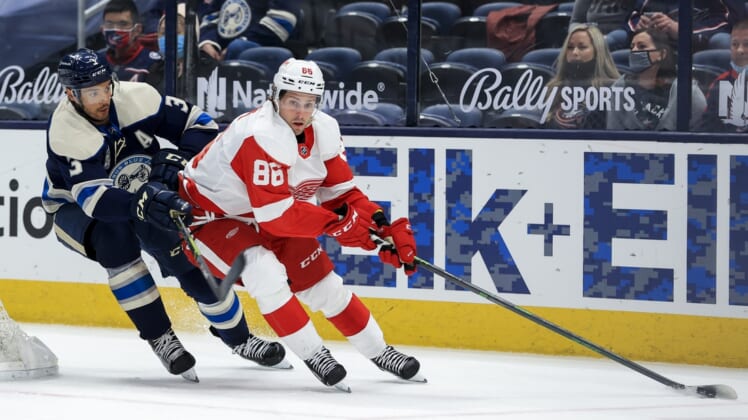 The visiting Detroit Red Wings erased a two-goal deficit by scoring three in the second period to beat the Columbus Blue Jackets 5-2 on Friday night.

The two teams will conclude their 2020-21 seasons Saturday night in Columbus.

Both teams could end up tied in points, however, if Columbus was to win Saturday’s game in overtime or a shootout.

Columbus, which saw its five-game (2-0-3) point streak snapped, opened the scoring 1:43 into the game when defenseman Gavin Bayreuther fired in a shot from the point that deflected off Michael Rasmussen.

It was the first NHL goal for Bayreuther since he was with Dallas and scored against Calgary on Nov. 28, 2018.

The Blue Jackets made it 2-0 at 7:48 of the second on Nathan Gerbe’s first goal of the season.

After that, the rest of the second belonged to the Red Wings.

Detroit got its first goal on a power-play chance with 6:10 left, as Joe Veleno scored his first NHL goal by one-timing a pass from Jakub Vrana past Columbus goalie Matiss Kivlenieks.

Just 58 seconds later, Danny DeKeyser tied the score on a delayed penalty, as he followed up a shot off the end boards from Mathias Brome.

Detroit took its first lead of the night with 3:08 remaining in the period on a hard shot from Vrana after the Blue Jackets turned the puck over twice pinned deep in their own zone.

That was it for the scoring until Detroit’s Vladislav Namestnikov twice scored into an empty net — the first with 2:02 remaining and the second with 47.1 seconds left.

In his last meeting with the Blue Jackets, Thomas Greiss made 33 saves and earned a shutout despite losing 1-0 in a shootout.

On Friday, Greiss ended with 22 saves and got his third win in his past four starts.

Kivlenieks, making his first start for the Blue Jackets this season, had 31 saves in the loss. He had not appeared in an NHL game since Feb. 28, 2020 against Minnesota.