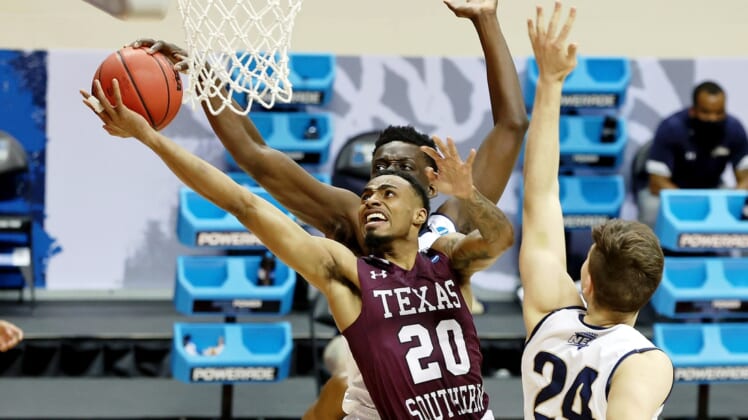 John Walker III scored 13 of his 19 points in the second half to lead Texas Southern to a 60-52 victory over fellow No. 16 seed Mount St. Mary’s on Thursday in the First Four of the NCAA Tournament at Bloomington, Ind.

Jordan Gilliam added 12 points for Texas Southern (17-8), which overcame a 10-point halftime deficit to win its 10th straight game and 15th of its last 16.

The Tigers face top-seeded Michigan in a first-round contest on Saturday at West Lafayette, Ind.

Damian Chong Qui scored 14 points and Mezie Offurum recorded 10 points and a career-high 16 rebounds for the Mountaineers (12-11), who had a four-game winning streak snapped.

The Tigers made 38.6 of their shots and were 6 of 14 from behind the arc. Texas Southern struggled from the free-throw line, making just 10 of 19 shots.

The Mountaineers shot 38.8 percent from the field, including 6 of 22 from 3-point range. Mount St. Mary’s also had trouble from the line, hitting just 8 of 16 attempts.

Texas Southern ripped off the first 11 points of the second half to take a 31-30 lead.

Walker scored the first six points of the push and Gilliam scored the last five, including a 3-pointer to cap the surge with 17:01 remaining in the game.

The Mountaineers responded with the next eight points to move ahead by seven but the Tigers answered with their own 8-0 spurt to hold a 39-38 edge with 10:22 remaining.

A short time later, Gilliam connected on another 3-pointer to give Texas Southern a 46-42 lead with 8:11 remaining.

Nana Opuku’s layup pulled Mount St. Mary’s within one with 7:07 left but Walker and Michael Weathers scored back-to-back hoops to give the Tigers a 50-45 lead with 4:59 remaining.

Chong Qui scored the Mountaineers’ next five points to cut Texas Southern’s edge to 52-50 with 3:10 left.

Joirdon Karl Nicholas slammed home a follow to give the Tigers a four-point lead with 2:06 remaining and Mount St. Mary’s was unable to mount a final push.

Chong Qui drove for a buzzer-beating layup to give Mount St. Mary a 30-20 halftime lead.