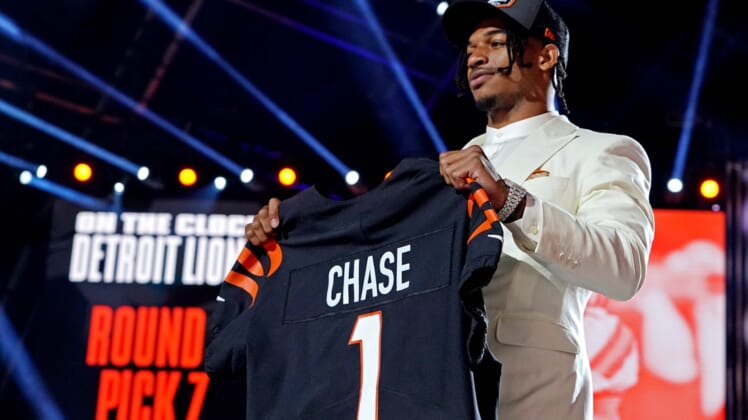 Apr 29, 2021; Cleveland, Ohio, USA; Ja’Marr Chase (LSU) poses with a jersey after being selected by Cincinnati Bengals as the number five overall pick in the first round of the 2021 NFL Draft at First Energy Stadium. Mandatory Credit: Kirby Lee-USA TODAY Sports

The Southeastern Conference had a record 65 players selected in the 2021 NFL Draft, breaking its own record of 64 set two years ago.

SEC players accounted for 12 of the 32 first-round picks and six of the first 10.

The first SEC player off the draft board was Florida tight end Kyle Pitts, the fourth selection by the Atlanta Falcons, followed in succession by wide receivers Ja’Marr Chase (Cincinnati Bengals) of LSU and Jaylen Waddle (Miami Dolphins) of Alabama.

In all, 10 members of the Crimson Tide were selected.

Second on the list was the Atlantic Coast Conference with 51 selections, headlined by No. 1 overall pick Trevor Lawrence. The Jacksonville Jaguars selected the Clemson quarterback.

Among the other Power Five conferences, the Big Ten saw 44 players drafted, including Ohio State quarterback Justin Fields, selected No 11 by the Chicago Bears. The Pac-12 was next with 28 players, followed by the Big 12 with 22.